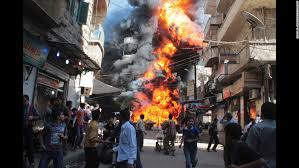 The Syrian war has been going on for 6 years, and it doesn’t seem like it’s going to stop soon. With President Bashar al-Assad and the government allies versus other rebel groups in the country, like the Sunni arab rebel groups, the conflict is getting more heated in the region.

The Syrian government escalated the conflict when they used chemical weapons against their own civilians in North Western Syria. The US responded with direct military intervention by using tomahawk missiles to bomb Syrian air bases, which is the first military action executed by President Trump.

This latest article that I annotated is regarding the gas attack initiated by the Syrian government, and I hope get some feedback and opinions on the issue.