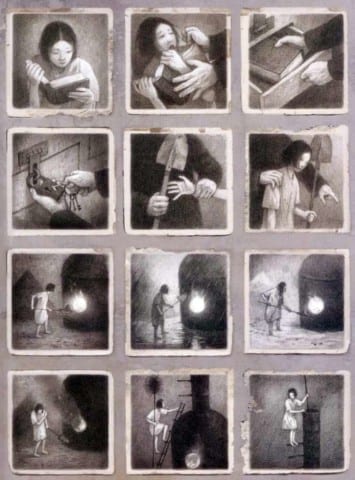 The third chapter in The Arrival is a very important chapter because it gives the reader multiple point of view. The main character, the father meets two people who share their immigration stories with him. These stories are told as flashbacks to the past and show the reader some of the different push-factors that cause people to leave their homes. In chapter III of The Arrival by Shaun Tan, the author shows the reader the central idea: People immigrate for different reasons.

In Chapter III, the father wakes up and is greeted by the creature that he is keeping as a pet. The man gets ready and goes out into the world with a map. He has trouble understanding the map because it is written in a strange language. A local woman helps him. The man takes a flying boat and meets a young woman who is also an immigrant. she left her home country because she was treated poorly and forced to work as a slave in a factory. After the boat ride, the man tries to buy food. Since he cannot speak the language, he uses pictures to help him communicate with other people. The father meets another immigrant who left his country because of dangerous giants that were killing all the citizens there. We learn that the man escaped his country with his wife by selling the wife’s jewelry.  After telling the father his story, the other man invites the father to his home for dinner with his family. The food and customs are very strange to the father, but being with this immigrant family reminds him of his own family, back home.

There are many different settings in Chapter III of The Arrival. The setting of Chapter III changes, showing the reader different times and places. The father wakes up in the city. It is crowded, busy, and full of many people. The tall buildings and statues are much bigger than the people. The flying ships remind the reader how strange and magical this new land is for the immigrants in it.

In the little girls flashback, the author shows the reader a dark, depressing setting from the past. There are many shadows and the color of the images changes to show that this is an event from the past. Again the people are show to be much smaller than the machines. This tells the reader that the push factors (or problems in the home country) are too big for the people to fix, alone.

After the flying boat ride, the reader is shown a very different kind of setting. This setting appears to be a town or village somewhere else in the new country. The buildings are smaller and there are many happy statues and flowers. This setting is much friendly and welcoming than the setting of the crowded city. IT is here that the father makes a friend and is invited to have dinner with his new friend’s family.

The author of The Arrival, Shaun Tan, grew up in Australia. He studied science in school, but became an artist when he finished school.  He has created many picture books and won awards like Astrid Lindgren Memorial Award for his art. Tan is well-known for his “dream-like pictures” (Weaver 234). Tan used his own personal experiences of growing up in Australia where there is a long history of Chinese immigration. His father migrated from China to Australia before Shaun was born, but he grew up hearing many of his father’s immigration stories.  Tan wanted to “combine many different immigrant stories” (Hutchinson 16), instead of just showing one point of view.

The images on page 52, offer the reader another example of a different type of immigration. While the father in the story, leaves his family and travels to the new land for work and money, the little girl in these images barely escapes her country with her life. The images clearly show her being forced into child labor. This seems like a punishment for her reading a book.

There are many symbols in these images that help support the central idea that people immigrate for different reasons. While the father left his country because of some strange monster or dragon in the sky above his home, the little girl migrates to escape slavery.

The book she is reading in the first panel can represent knowledge or education because people can learn a lot about themselves and the world from reading books. The fact that a man’s hand takes the book away from her symbolizes how in this country girls were not allowed to read. The book is taken from her and looked away in a drawer. This shows how education was kept out of reach of women and young girls in this place.

The furnace (or oven) that the girl has to keep burning looks similar to the one-eyed giants that the reader will see later in this chapter, when another man remembers the problems that caused him and his family to leave their home.

Chapter III is a very important part of The Arrival. The author begins to show the reader the many different point of views that the immigrants have. Shaun Tan uses the symbols in this chapter to show that people migrate for many different reasons. While some people immigrate for money and opportunity, other people leave because of violence and slavery. It is a good thing that people have the chance to change where they live. This opportunity gives them the chances to improve their lives and escape the negative experiences of their past.