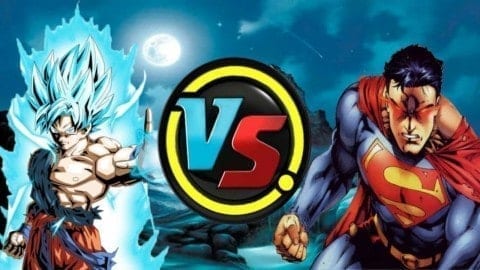 One dark day, Goku was training to fight in a war. He was told that an alien-human by the name of Superman was going to be there.

Goku knew that he was the only one who can fight this warrior, he was more powerful.

Goku started to train even more harder because he did not want to lose this fight.

“This guy is going to lose this fight against me, I am way more powerful,”

This is what went through Superman’s mind everyday when he was training. He was very sure of winning this fight.

Who is going to win? Who is more powerful?

The day of the war came and Superman flew rapidly to the battlefield,he was ready to battle.

Goku was finishing his training and when he was about to finish, he punched his punching bag enchanted in fire to the floor. After that, he flew to the battlefield and was ready to battle.

Superman took the first move, he laser eyed Goku and punched him away. Goku was on the ground in pain.

“To easy,” Superman said as he walked away.

But in surprise Goku got up and and punched Superman to the sky! Then he was rapidly hitting Superman.

Goku was beating Superman, but Superman weakly in pain still got to laser eye Goku in the eyes. Goku got blinded and went to the surface of the planet.

Goku could not see but still could fight. Superman swiftly went around Goku who could barely see, and went to get a tree. He laser eyed the tree and the tree was burning in fire. Then he whacked Goku.

Goku was on the ground but he was healing of the blindness and the hit.
When Goku got up, Superman quickly went to cover Goku with a tree on fire. In addition, he was even throwing rocks on top of him.

“You are never going to beat me Goku!” Superman screamed out loud in anger.

But when Superman was about to stop, the rocks and the tree on fire got blown out, including Superman. Goku rose up and was covered in electric blue fire, even his eyes were blue.

Wow! This is a really good story! keep it up!