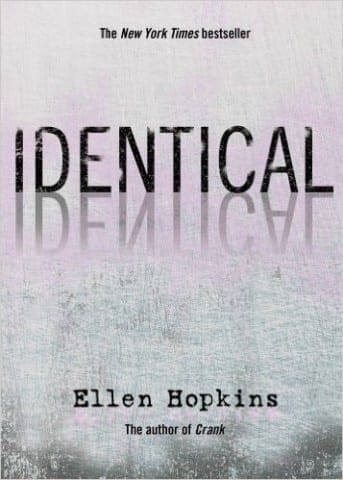 The first character’s name is Conner whose age is not given.

The second character’s name is Tony who’s age is also not given.

Lastly, there’s Vannessa the only girl in this book whose age again isn’t given.

Identical
Identical by Ellen Hopkins
Dear, Cecilia
I am intrigued by your post since they are all in a asylum. I wonder the back stories of all three characters Vanessa, Conner, and Tony. As to how they became suicidal and why they tried to take their lives. One thing you said that stands out for me is how you said they were overcome with loneliness and sadness. I think this is interesting because they might have became lonely by their parents ignoring them or always working. They might also of became sad by someone in their family passing, getting bullied at school or by not getting what they wanted. This relates to kids in school today being overcome with depression due to getting bullied and labeled, or being sad since a family member passed or not being included in something. Thanks for your project. I look forward to seeing what you write next, because i think you post about good books. The topic you brought up relates to the real world about what people go through the ones that find help and the ones going through the same thing that feel the same way.