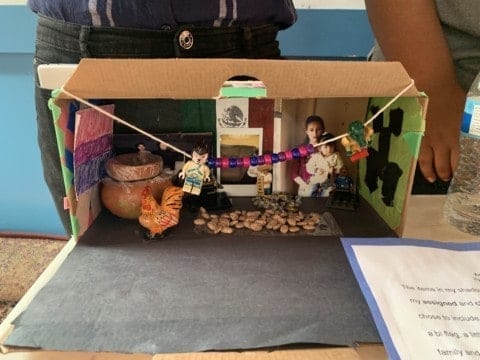 The items in my shadow box represent the counter narratives of my assigned and chosen identities. Some of the items that I chose to include in my shadow box include pictures of my family, a bi flag, a little pot with beans and legos. The pictures of my family and the pot represent me being Mexican. I decided to mostly put a lot of little objects that represent me being Mexican because it’s an identity that I am really proud to have; especially at this moment in time, where we have a really racist president. Some people may feel ashamed of who they are because he is able to make them feel like they aren’t welcome here and that their sacrifices and efforts to be here mean nothing. But I’m not ashamed at all. My parents made many sacrifices and put in a lot of effort to get me to where I am today and I’m extremely grateful for that. No one should ever feel ashamed for wanting a better life for their family. I included a bi flag because it represents my sexuality which is being bisexual. it’s an identity that I’ve struggled with for a while because I would always think that I was disgusting for liking girls. I’ve always had the mindset that liking the opposite gender was disgusting from a young age because of the dominant narratives that people from the LGBTQ+ community would burn in hell and that they should die. But now that I know that there is nothing wrong with liking the opposite gender I’m not ashamed of who I like. The legos represent my childish side. Being childish makes people think that I can’t be serious about anything when I can. Some people think I’m weird for being childish at this age but being childish is what keeps me happy. By putting legos it shows that I don’t care about what other people think about me and that I’ll keep being myself.

Hi I’m Bianca and I’m a student at San Jose State. I think it’s amazing that you are comfortable with being true to yourself and even if it seems childish to others and it makes you happy then it doesn’t matter what others think. I also enjoy some things that others view as childish but it’s the simply things that I like and it’s good to be different and be yourself.

Thanks for sharing about your writing. I look forward to seeing what you write next because I really loved reading how you explained how being different is not a bad thing, it’s something we should be proud of. It empowered me and made me realize that we shouldn’t hide our differences; instead we should show and learn to appreciate them. We should love ourselves from where we came from and who we are. Again, thank you for sharing about your shadow box!

Sugeiry,
I think it’s very brave of you to acknowledge who you are as a person. It’s not easy being different to everyone else because we are all accustomed to traditional customs and values. Especially now living in a judgmental world it can be challenging and scary to show who we really are. I value your courage to speak up and express to the world that being yourself is more than enough. I admire that you highly speak about your race and embracing your culture because it is an important part of your identity. I am also from Mexico and like how you chose objects that are commonly used in our hometowns to show who we are. Thank you for sharing your shadow box!