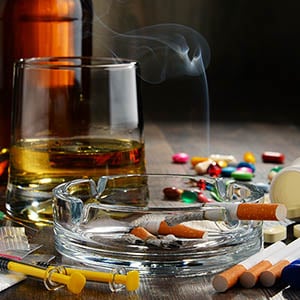 Substance abuse has proven to be a large problem in America and especially within the Native American Indian Population. Starting as young as 8th grade, many Native teens report exposure to substances such as Alcohol, Opium, Marijuana, and other drugs. I was inspired to research this topic after reading several works from Sherman Alexie and There There by Tommy Orange.

Alcohol addiction is one of the most important themes throughout the stories. Substance abuse is detrimental to Indian communities and leads to an unbreakable cycle of addiction throughout generations. Www.continuumrecoverycenter.com asks the question, “Where does a young person find support when their peers and role models are using drugs and alcohol?”. These addictions lead to a series of other effects all contributing back to substance abuse.

This issue is not hard to find, and there are organizations working to help make a difference, “The objective of the Alcohol and Substance Abuse Program (ASAP) is to reduce the incidence and prevalence of alcohol and substance abuse among American Indians and Alaska Natives (AI/AN) to a level at or below the general U.S. population”(Source 1). So far the problems facing Native Americans with substance use are still very high. It’s very important to understand why we see a higher rate of substance use in native American populations.

According to source 2, “~5x as many Native American teens use Cocaine and ~2x more smoke than the rest of America.” We see this disproportionately for many reasons. Source 3 goes in-depth about these reasons. “30% of Indian households are under the poverty line and many more barely scrape by, this creates high levels of stress and mental health issues. Source 3 points out that “many Native Communities lack doctors and as a result, there is a high amount of self-medication.”

These are just a few of many ways that the cycle of abuse is started. I think that it is very important that all Americans become educated on the history of Indigenous peoples to be able to understand the current state of modern Native peoples.

I am appreciative with your post, “Substance Abuse,” because it’s a devastating topic especially when your loved ones suffer from it. I definitely agree that substance abuse is easy to get attached to because it has become such normality. Younger children might develop substance abuse at such a young age because they see their role models doing it so it makes them want to try it.

One sentence you wrote that stands out to me is “Substance abuse is detrimental to Indian communities and leads to an unbreakable cycle of addiction throughout generations.” I think this is insane because imagine growing up in a household where substances are normalized and the younger children see substance abuse as a good thing. Some are also addicted to substances because they are hurt, traumatized, etc., and they feel as if nothing else will help them. It is tragic that Native Americans are the ones who suffer from substance abuse higher than everyone else because of poverty, lack of healthcare resources, and self-isolation.

Thank you for writing. I look forward to seeing what you write next because I like how you explain why substance abuse is such an important subject. I would like you to continue speaking on this because it is such a normalized topic with an unfortunate ending for all those who suffer from it.

Dear Toby,
I enjoyed your post greatly, “Substance Abuse,” because it is a tough topic to hear about loved ones or people, in general, going through the issue of substance abuse. You are correct when saying there are multiple reasons for someone creating a substance addiction and everyone faces challenges where this may be an outlet for them.

One sentence that you wrote that stands out for me is discussing where someone can find support when they’re surrounded by people who use substances. I think this stands out to me because it is definitely a difficult and different change to experience going from one surrounding to another and is a struggle to stop substance abuse.

Thank you for your writing I look forward to what you write next because this is a topic that should be spread out more often since it has become normalized. I hope you can continue to spread this information.

Dear Toby,
I thoroughly enjoyed reading your post. You seem to have a passion for learning about the effects drugs have on Indigenous populations in the United States. I think you are getting to a much larger picture: is there a correlation between substance abuse and socioeconomic/financial situation. This is a phenomena that has currently being thoroughly studied. Life in America for many populations of minorities is already SUPER stressful. Substance abuse can serve as a form of calmness when citizens are in desperate need of relief. Native Americans are a minority group and I am not surprised that the intake of drugs is significantly higher than the remainder of the population. The United States government needs to be fully aware of this issue and Native Americans must receive care from rehabilitation centers to get their lives in a better pattern. Switzerland was experiencing a severe drug issue amongst their populations minorities and used economic loans through taxes and tariffs and used the money to build rehabilitation centers, their results were amazing and the intake amongst the citizens significantly decreased. The difference in the responses of Switzerland and the United States, is that the United States tried to apply pressure and incarcerate minority members with drugs currently at their disposal. Switzerland, on the other hand, came up with “four pillars” that every drug attic needs to mentally support them into overcoming addiction. The United States failure to support their citizens has lead to even bigger issues and more people are dying each day. The government must take action and must take care of their citizens.

Dear Toby,
I was very intrigued by your post, “Substance Abuse,” because it is impressive how much you know and care about this issue and understand the situations and reasons why Native Americans choose drugs and other substances over their well being. Substance abuse is a real problem that I knew about already, but did not realize how bad it was for this ethnic group. The reasons you stated in your post were stress and environment which seem to be the main reason for people to fall into substance abuse. However, since about 30% of Indian households live under the poverty line this might be an issue that can lead them to drug abuse due to the lack of income. This was a very interesting and great post thanks for writing and I’m looking forward to seeing what you write about next.
-Litzy

Substance Abuse is a serious problem, we all know that. However, I had no idea how it affected certain groups more than others, especially Native Americans. This was very eye-opening and the stats that the author used were very effective. I don’t think that many people are aware of this issue and it definitely is something that needs attention. Great Job!

i agree that the crisis over substance abuse has become very huge in recent years. The stats that show Native Americans are more adversely affected highlights how urgent we need to deal with this issue. I believe organizations as well as the government itself need to do a lot more to break this self-destructing cycle of addiction and to make sure Natives won’t fall into the same trap.

Substance abuse is a problem for many people around the world. I was really surprised to find out that the Native American population is one of the groups that is greatly affected by it. Some reasons that you said were stress and environment. I have read that genetics could be a possible factor that contributes to substance abuse like alcoholism. Do you think that could be a possibility regarding this situation?

Those stats are crazy