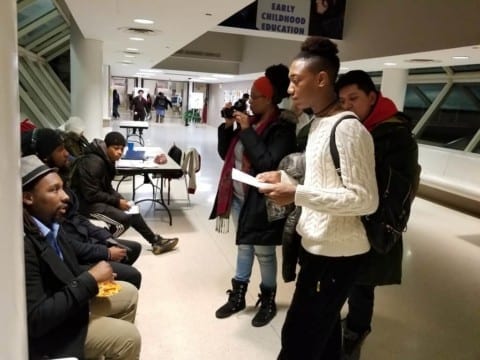 I was at Hostos Community College when a professor at the college, Ms. Katherine Boehm gave my New Media Arts peers a tour around the college. While on the tour, a student named Matthew Benvenutti who was apart of the tour with me was recording and gave me an idea. Rather than just stopping someone in the middle of the street, why not ask a common person involved with the college who has a task on their hands about stress, anxiety, and depression. So time flew by and midway in the tour, I was observing people and checking to see who I should interview when I ran into these two young men who were students at the college the college.

I first stopped them in the most polite way possible and asked if I could talk to them for a few minutes. They said, “Sure.” Then I went on to say my name and that I have a video project for my New Media Arts class about Depression, Anxiety, and Stress. After that, I asked if they would be willing to do an interview, and they seemed to like the idea and decided to do it. Their names were Hanzel and Adrian. The interview overall was great, but there were a few key ideas that really stuck out to me.

One quote that Adrian said was:

“When I think of depression I-I feel like it’s- it’s a state of mind it’s a state of being, right. So sometimes I know like one of my friends he goes through depression and sometimes he wakes up and he says he feels perfectly fine; he’s just, the energy is not there. The day doesn’t work for him.”

This quote really stuck out because it goes to show that we are all people. We all have issues, and we have to get through them. Your mind might not be in the same place, but then again it is YOUR mind. You have to find a way to control it. Some days may be tougher than others, but you will somehow find a way to get through it.

Another quote that stood out to me–said by Hanzel this time around–was:

This quote actually stood out the most because he was actually very accurate or on point with the topic. He knew that stress is basically a load in your mind that can cause you to overthink.

And last but not least, the final quote by Hanzel was:

This quote was actually the tip of the iceberg because it shows how both stress and depression tie in with each other and still cause you to overthink more than you’re actually supposed to.

This Arts Media project sounds interesting. Have you done any more research to see how depression and stress are connected? This could add valuable information to your piece. Also, explain more of how these students deal with the stress and depression. Great job.