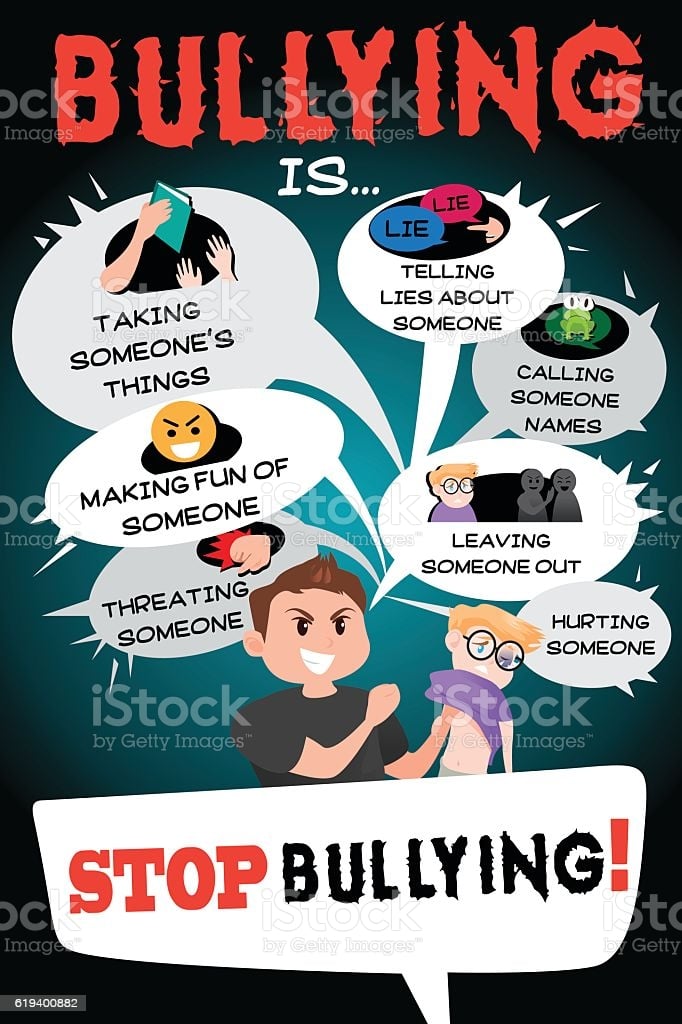 In the article “ Bullying Awareness” I learned the hardship of bullying and the negative effects it causes those being bullied. Bullying is a huge problem in many schools and many students are affected by it. There are a variety of types of bullying such as physical, verbal and cyberbullying. It is crazy to think how many children have been bullied. Drastically sad because in some cases bullying isn’t addressed until the victim of bullying attempt to hurt themselves. Actions such as suicide can be taken when being bullied which is something that no one should ever face.

I think bullying needs to stop I believe this because we are all human beings and we should all be treated with respect. I also believe that schools need to take more action to prevent bullying. Bullying can lead to severe consequences when in reality no one should have to deal with it. It is not okay because as mentioned most of the time bullying happens at school and that can stop children from going to school and their education because they are afraid to attend class. For many children, it can be a nightmare every day, and teachers nor parents even know about it which is the sad thing because they also feel afraid to speak out and tell someone. Bullying needs to stop!!

Do you know any methods to prevent bullying from happening?

I am impressed by your post, “STOP BULLYING” because I believe and know that bullying is wrong. No human being should be bullied because of the person they are, how they look or act. It is inhumane and wrong on all sorts of levels. One sentence you wrote that stands out to me was, “Bullying can lead to severe consequences when in reality no one should have to deal with it”. I think it stood out to me because bullying can take a hit and toll on someone’s mental and physical health. Once someone experiences bullying, that experience will truly stay with them for their entire life. Everyone should always treat each other with respect and how they would like to be treated. Thanks for writing, I look forward to seeing what you write next, because your post and topic you wrote interested me. I strongly believe issues like this need to be discussed and brought more awareness to.