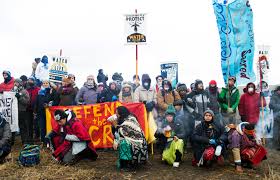 I have been recently researching Native American reservations/ land access and also the recent standing rock protests. I chose this topic specifically because I was interested in how Native American land has shrunk since America was formed. I feel like this is an issue today because the government continues to intrude on Natives land and it’s important for the public to know to prevent reservations from disappearing.

Thankfully recent conflicts like the standing rock protests have attracted mainstream attention. This protest is against the construction of a pipeline that goes through sacred lands. Due to media attention the Obama administration eventually intervened and construction was halted. However when President Trump was sworn into office he signed a bill to continue construction of the pipeline and it was eventually built. This is just one example of Native American demands being swept under the rug.

As I described above the pipeline was heavily protested against and led to mass media attention. However it still ended up being built after all the dust had settled. I think the government needs to be held accountable for the protection of Indigenous peoples lands. There were many things that could have been done such as including the residents of the reservation in the decision making process. Unfortunately this was completely avoided probably because an alternate pipeline plan would probably cost money! To avoid this in the future we need to continue to update the public even after the initial dust has settled. In the future I would like to learn more about Native American land violations. It is important that we speak out when we encounter injustices because our voice is our greatest tool for change.

“Meet the Youths at the Heart of the Standing Rock Protests against the Dakota Access Pipeline.” ABC News, ABC News Network, 23 Feb. 2017, abcnews.go.com/US/video/revealing-documentary-youth-heart-standing-rock-protests-dakota-45674446.

“Native Filmmakers Are Telling Their Stories on Screens across the Country.” Newsela, 20 June 2018, newsela.com/read/native-storytelling-gets-more-screentime/id/41504/.