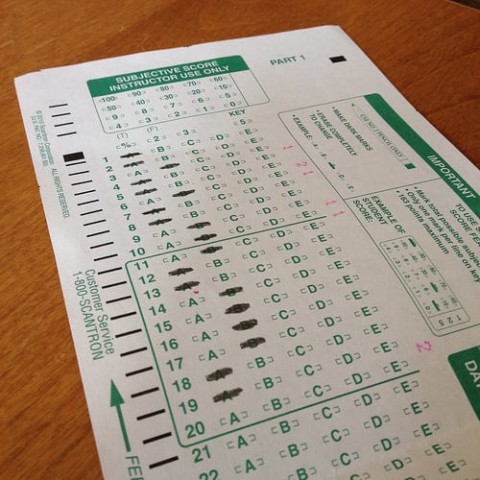 Standardized testing is used in the US system in order to gauge what a student has learned and college readiness. Standardized tests such as the ACT and the SAT are important steps in the path toward college. These tests are important factors in the admissions process and indirectly to the working world. However, the tests have been criticized for being an unfair estimate of a students intelligence and applicable skills. Students also have different opportunities to prepare and study for the tests based on economic and social factors. The tests as a whole tests how a student can answer meaningless questions on a single day with different levels of readiness, not their true academic ability.

As a whole, standardized tests do not achieve what they are supposed to in testing students knowledge evenly. According to fairtest.org, the tests reward students who can think quickly on shallow questions. The tests have disregard for deep thinking and creativity in answers. The tests do not accurately represent the vast majority of students curriculum, testing them on sometimes unfamiliar knowledge. Scientifically, how the tests break up questions does not align with how the brain works. Standardized tests breaks up knowledge and concepts into separate bits; however, the brain works by connecting new information with things that were previously learned, not chunking. This can be solved by creating more questions that require more thought and have more significance to the test section.

Another factor in a students success on these standardized tests is the preparation they receive from their school and third party resources. In another article, the author talks about the unfairness of students taking the same test. The test can be seen as an equal way of evaluating student, but as students have different education backgrounds, anxieties, and needs, the tests becomes less and less baseline. The point is also made that mainly affluent students have many more resources than students who take the test without prep. Because of the inconsistency in test readiness, the test is not a true test of college success. Another aspect of many tests is the essay portion. This portion cannot be graded by a machine without bias and in turn has to be graded by a person. Although they are given a guideline on how to grade the essays objectively. While they are told to be objective, human error and subjective reasoning can account for different grades on similar essays. The tests shows bias toward different populations of students creating an inherent unfairness.

William,
This topic seems to be coming up a lot lately. I agree with you on the fact that standardized testing is unfair to students. Many people get test anxiety and the thought of being timed to finish a test makes matters worse. Also, many students do not do well under pressure and don’t like the generic, one sided questions and answers of the SAT and ACT. Along with the thought of essays being biased while graded, I completely agree. The person grading essays may have certain opinions or may not like the style of writing the student used. Have you heard that some colleges don’t look at SAT scores and essays? I find that interesting and think it is a good idea. Since standardized tests are asking students to answer meaningless questions and not think creatively I believe colleges should avoid looking at scores to accept students into their school. I think your argument is thorough and thought out very well!

I think your topic was very interesting because as seniors in high school we have all experienced and had to study for standardized testing. You made some very interesting points that I have personally experienced, and I think that bringing awareness to this issue is very important. Do you have any ideas on how to possibly fix this?

Interesting topic, William. This topic stood out to me because I think the ACT standardized test is a very unfair way to learn about how intelligent someone is. For example I have a higher than average GPA and I take rigorous courses; I would consider myself an outgoing student. However, my ACT score is much lower than a lot of other people’s which might be misleading to colleges if they rely solely on my test scores for admission. They do have other portions for admission which includes an essay, letters of recommendation from teachers, your grades from high school, along with everything else included in your application. This is a very interesting topic to be further discussed!

I liked your title it was very clever. I also liked how you brought to my attention that standardized tests sometimes don’t do what they were created to do, in the terms of testing students evenly.