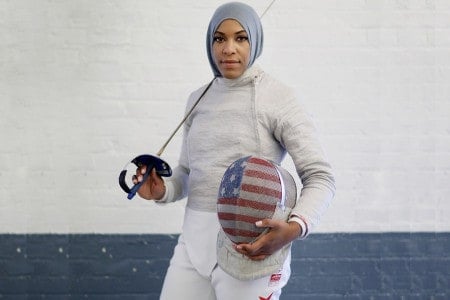 In the book Proud, Ibtihaj Muhammad describes the discrimination she faced because she was a woman, because she was African American, and because she was Muslim. Still, she continued to achieve success through determination, confidence, and strength. Throughout American history, women have faced gender, racial, and religious discrimination in sports, but now many women are challenging this inequality through their accomplishments in sports, and nothing will stop them.

Ibtihaj Muhammad was the first Muslim woman to compete in the Olympics for the United States. She and her team won the bronze medal in the 2016 Olympics. However, the path to the Olympics included many obstacles mainly because she was a Woman and Muslim. She experienced much success in the fencing world, however, this success didn’t earn her respect in the eyes of her trainer Sam. Ibtihaj remembers “He refused to invest his time with me, treating me like a chore, or worse, a waste of his effort…my only guess is that he lacked a general respect for women”( 151). Ibtihaj’s trainer spent more time with his male students and he didn’t take her seriously which gave off the impression that he didn’t believe in her and her goal to be in the Olympics. Ibtihaj didn’t give up though. She was asked by Hillery Clinton if she would like to be part of the Department of States council to empower women and girls through sports. Ibtihaj jumped at this opportunity to serve others and she started traveling the world and speaking to children at schools about her experiences as an athlete. This was something she loved because she was able to reach out to other girls like her remind them that they can achieve their dreams too.

A New York Times article called “8 Times Women in Sports Fought for Equality” describes eight famous cases where women made a difference in the sports world by promoting equality. Discrimination against women in sports is not new. In 1967 a woman named Katherine Switzer entered the Boston marathon as “K.V. Switzer” to be officially registered. At the time, women weren’t allowed in the race. During the race, an official even tried to remove her from the race, but she finished anyway (“Mervosh”). Her determination proved that women and men were equals in sports and she could finish just as well or better than some men. Five years later, women were allowed to participate in the race. Katherine Switzer made a difference and she showed other women that they too could change rules and ideas that they thought were unfair.

Many women are also focusing on the pay inequality in sports. In the Women’s National Basketball Association (W.N.B.A) the players often receive one-eighth of what NBA players are paid. Skylar Diggins-Smith, a W.N.B.A player has brought attention to the pay gap between men and women in sports. This disparity in pay is an issue across all sports. The USA women’s soccer team had a legendary battle for better pay and even filed a lawsuit against the United States Soccer Federation for gender discrimination. Venus Williams is another well-known sports figure. She fought for and won, equal prize money for women tennis Wimbledon Champions (“Mervosh”). These fantastic athletes are using their struggles and success to help eliminate gender discrimination in sports.

However, it can be difficult for women to have their voices heard. Women make up 40% of the participants in sports, but they only get 4% of the media’s attention (“Saiki”). So, to support equality in sports Nike has created a new sports Pro Hijab meant for Muslim athletes (“Weinreb”). Because Nike is such a powerful company and brand they have lots of influence all over the world and are helping to change stereotypes and make sports more accessible to all genders and faiths.

Women such as Ibtihaj Muhammad are changing the way girls around the world think about themselves. Ms. Muhammad has set an example that says no matter what gender you are or what religion you choose to follow you can achieve anything you set your mind to. These women who are standing up for equality in sports are creating role models for the next generation of girls to be inspired by.

I am glad about your post “Sports Inequality,” because this brings up the discrimination women have faced and women are still facing to this day. Ibtihaj Muhammad is a woman with a lot of determination and confidence. Even though she wasn’t seen as an equal to her peers or to her trainer, she still decided to strive. I would say, in a way, she was an influential woman in sports due to the fact that even when they neglected her as a student she still succeeded.

One sentence you wrote that stands out for me is: “In the Women’s National Basketball Association (W.N.B.A) the players often receive one-eighth of what NBA players are paid.”  I think this is something very important to bring up because, in history, women were always seen as less than men. They were always seen as caregivers and stay-at-home wives. They were always told what they can wear or what they can speak, and knowing that women are speaking up, were apparently “asking for too much.” The fact that even the government still pays women less than men even though they play the same sports is very upsetting and it’s seen in a really wrong way. Women are capable of doing the same things men can and we have even proved it. In WWII, women were running the factories and they were the ones that hustled to make the airplanes and ammo for those who were at war.

Thanks for your writing. I look forward to seeing what you write next because I really like seeing people rise up and talk about the issues that are happening around the world.

I am impressed by your post, “Sports Inequality”, because it is amazing how Ibtihaj Muhammad has brought attention to the ongoing inequality in sports and athletics. I think it’s shocking that women still face gender, racial and religious discrimination in sports.

One sentence you wrote that stands out to me is: “Ms. Muhammad has set an example that says no matter what gender you are or what religion you choose to follow you can achieve anything you set your mind to.” This is dope because she is using herself as an example to inspire all the young women who have aspiring dreams in sports.

Thanks for your writing. I look forward to seeing what your write next, because I like how you chose to highlight the issues of woman inequality such as pay. I would like you to continue talking about woman inequality.