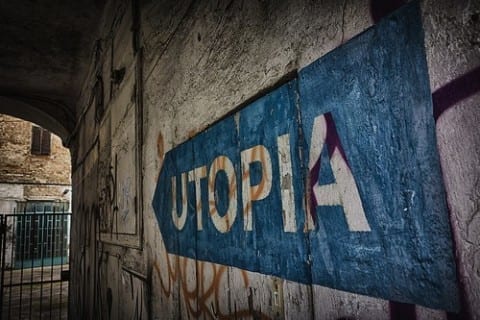 To begin, the novel Fahrenheit 451 connects to 2017 because both the superiors in the present day and the novel have done things to shape society into their version of a utopia without the consent of their citizens.

In the novel, everything that happens takes place in the future where everything is different. Such as the protagonist, Guy Montag, is a fireman and his job is to burn books- as well as the structure that shelters them (instead of putting out fires like the firemen we know today). The reason being is because books and literature are illegal and are to be feared by the public as the government does not want their citizens to have their own argument- to have different opinions that can be debatable and give people the knowledge we have today.

Of course, this could show coercion as this law, the law that books are illegal, was forced upon the public by the government or superiors and in turn, the public simply accepted and went with it. And while some people in the novel resisted and kept books in their homes, the firemen would eventually find out and simply burn their home and the books. Sometimes even the owner if they resisted being arrested. “You burn the books and then you burn the ashes,” one of the protagonist’s antagonists, Beatty, had said to Montag. Which then shows how the firemen simple burn the knowledge of the books.

To compare, in today’s society, our new president of the United States, Donald Trump, has made the travel ban where refugees and immigrants cannot come into the United States. And of course, he has done this without the consent of the U.S. citizens. Meaning that is was forced upon us. And while people are resisting the travel ban, there may be a chance that the travel ban will be discarded- but then again, maybe not. And this goes to show how the novel Fahrenheit 451 and our society today compare to each other.

I was moved by your post and really appreciated the elegant way you made a connection between your book and the current political state of America. It is true that it feels like people were not asked permission for the laws being put into place in both society which has left the “people” like you and me to feel frustrated, isolated, and wanting to protest since our government is not representing us right now. I especially liked your line: “And of course, he has done this without the consent of the U.S. citizens. Meaning that is was forced upon us.” This reminder that we are being coerced and possibly our news and outlets of information and working to make us feel like it was less of a force, or this is just the way it will be like, like what happened in your novel is important too. It is also scary to think that just a few people in power can do something that affects millions without our consent towards it, especially when it affects people so personally.

I look forward to reading more of what you have to say on the topic.