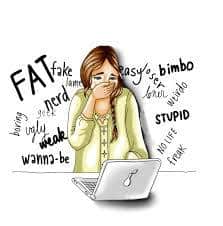 The new era that brought social media also brought along cyber bullying, suicide, and depression. Social media makes it easy for there to be no name behind a face. What’s posted on social media is permanent, and could ruin someone’s reputation forever. There have been multiple cases where admission counselors of colleges have made social media accounts and followed students to see what they’re doing. Employers, family members, and friends can find out a lot about you just by googling your name, so it’s important to be aware of the content you post online. Cyberbullying can be prolonged because it takes awhile to find the source of an account, and the victim can go through more isolation as the they wait for the bully to be found. Isolation itself, Mrs. Konnikova points out, can lead to a sense of helplessness and lack of control—feelings that are associated with some of the worst, most persistent psychological problems. She says bullying is the result of an unequal power dynamic—the strong attacking the weak. Bullying is the most prominent in the academic setting, but is active in the professional and adult life settings. Photoshop allows people to edit things on to people’s faces, edit their bodies, and put their bodies on other faces. If a corrupt photoshop image is released, it may never be erased. According to statista, in 2010 only 0.97 billion people had a social media account. Now, in 2018, that number is 2.62 billion users. As technology continues to advance, was does the future of our people look like? Everyday, people around the world are faced with bullying in general, and it is one of the leading causes in suicides. Studies state that over half of adolescents and teens are faced with cyberbullying, and that the same amount have engaged in cyberbullying. Of that huge percentage that were cyberbullied, there are about 4,400 cases of individuals that have committed suicide because of such. In today’s society, we are very technologically advanced and we have devices that can save everything that is being said or seen forever; even if you delete it. With these type advancements on devices, majority of these cyberbullying incidents are being screenshotted, saved, and sent out to many people. With websites such as Twitter, you don’t even have to follow people to see the “drama”, or really anything in general; you have the option to make your page private, however, there are few people on the Twitter community who follow this. One of those biggest problems being how we communicate with each other. When being online, people gain confidence that they may not have had before because social media allows us to hide things about ourselves. Social media has given a voice to everyone; even those whom may feel like they are unheard. Unfortunately, when it comes to allowing everyone to post what they may want, you may sometimes come across the pages or people who are negative; and that’s how cyberbullying occurs. The primary intentions of making social media sites was to connect with others and gain stronger connections with everyone around the world. But, sometimes social  media does more negative damage than positive things.