Social Change in the United States 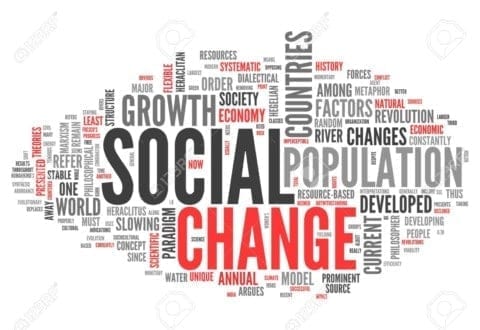 Social change, specifically the change in the public opinion and the laws of a given society, has always been slow when a society is forced to come face to face with an idea or concept they had previously disregarded. Historically, you can see this in any society with almost any issue, be it race, gender, disability, or the people you love. The United States is a country that prides itself on personal freedoms and the idea of the American dream, that anyone, no matter who you are can become successful. However, this hasn’t and in many ways continues to be untrue.

The United States has long had issues with racism. Despite being founded on the idea of personal liberty, slavery as an institution was kept until 1865, with the end of the U.S. Civil War. Even after the formal end of slavery and the passage of an amendment prohibiting discrimination based on “race, colour, or previous condition of servitude,” civil rights laws preventing segregation and other discrimination weren’t passed until the latter half of the twentieth century, almost one hundred years after the abolition of slavery.

The United States still experiences problems with racism today, with attacks or unreasonable searches based on how you look being commonplace to hear about on news programs. Of the U.S. prison population, 37% are Black or African-American males, despite that identity only making up around 6% of the U.S. population as a whole.

Right now, the Supreme Court is hearing a case on whether it is illegal to discriminate based on a person’s sexual orientation or gender identity. The case debates whether LGBTQ workers are protected under the prevention of discrimination based on sex laws. These laws, Title VII of the Civil Rights Act of 1964, prevent discrimination and segregation based on race, colour, religion, sex, or national origin in voter registration, employment, and public accommodations. A ruling saying that LGBTQ people are not protected by Title VII opens them up to discrimination not just in employment but also in things like housing and access to education.

Gender has long been another source of strife in the U.S. social and political climate. Women, despite making up almost half of the U.S. population were not given the right to vote until the second decade of the twentieth century and not given true legal protection against discrimination in areas like employment until 1964 with The Civil Rights Act.

In our current society, women’s reproductive rights and protection against harassment are big issues. Some states have passed laws limiting access to abortions, some attempting to prohibit it altogether. States have proposed jail sentences of up to 99 years for getting or helping perform an abortion, while rape is given only 5 or 15 years depending on if a weapon was involved.

Social change has always been a slow and difficult process, regardless of the time and regardless of the place. Social change, the coming around to equality of opportunity to everyone regardless of race, gender, and other things, is something every society needs to strive for. The U.S. has made large strides in civil rights in recent times. Public opinion of marginalized groups is remarkably high, and the turn of public opinion to acceptance of LGBTQ people in the United States was one of the quickest worldwide. However, despite great progress, the United States has a long way to go and relaxing the push for equality of opportunity now has the potential to undo decades of progress. As a society, we must continue to push so that regardless of wealth, race, gender, sexual orientation, etc, you have the same opportunities available to you as everyone else, the same protections on you basic and fundamental rights and personal liberties, and the same ability to succeed in the United States regardless of background.