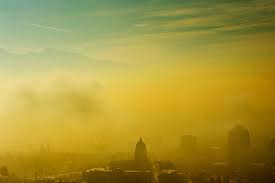 In the past week, the smog in Salt Lake City has settled at an uncomfortably high rate. The “red air days” have made breathing difficult for people with asthma, and I still can’t see more than 5 blocks away, due to the polluted air. This effect of these toxic particles sinking into our city is caused by a combination of different factors. Both the geography and the human-environment interaction play roles in defining our air quality in these winter months.

The Salt Lake valley is closed on the East by the tall Wasatch Mountain range, on the West by the Oquirrh Mountains, on the North by the point of the mountains that define the City Creek Canyon, and on the South by the points of both the Oquirrh mountains and the Wasatch mountains. This valley resembles a bowl shape, and keeps the particles contained in that. In the winter months when the clouds settle lower over the city and hold in the cold, the pollution comes with it. Human presence in the bowl intensifies the smog, but in recent years it seems to have grown to an unsettling level.

The human-environment interaction in Salt Lake City has not been healthy for our surroundings. Development outward, both South and North, increases the commutes of hundreds of thousands of residents. The amount of people driving on Utah roads as well as that time spent per person increases exponentially and with it comes the pollution. Global warming has shown its beginning stages to our world, and we cannot continue to ignore it. Changing small things in the ways we go about our days can slow its effect, and maybe someday enough people will realize it.

But for now, we will watch the smog build up in the places it’s easy to see (or not see) climate change bear its effects. It’s right in front of our eyes here, and all we need to do is address it and make the changes we can make. Each person plays a role, no matter how small. I hope that eventually people will recognize this.

Sophie, I really enjoyed reading your post and I believe this is an important topic that affects everyone not only in our school, but in the entire Salt Lake Valley. It is very interesting to look at all of the strange unsuspecting contributors to the pollution which can get as specific as the cleaning chemicals available in our cabinets. I found this article with strange ways we can improve the quality of our air here in good old Utah and I think you might find it compelling to take a gander: http://www.standard.net/Environment/2016/12/31/Five-surprising-things-you-can-do-to-improve-inversion-pollution.
It is mind blowing how much of the pollution is induced by the heating of our homes during the cold Winter months. Just being conscientious of our heating habits can have a positive impact on the quality of our air. Your article was very well structured and I enjoyed reading it. Good job!

Hi Sophia, I agree with your point. This week’s inversion in Salt Lake City is really bad too. I can’t even see one block away. These smogs will cause many health issues and will bring bad impacts on business efforts. We can’t change the terrain of Salt Lake City, but we can control pollution. You write that “it’s right in front of our eyes here, and all we need to do is address it and make the changes we can make. Each person plays a role, no matter how small. I hope that eventually people will recognize this.” Now it is the time to do so and we should protect our own environment.
Here are some useful resources:
http://www.ci.slc.ut.us/winter-inversions-what-are-they-and-what-we-can-all-do-help
http://www.health.utah.gov/utahair/

I agree that the pollution is a major issue. I also think that people need to change their ways and recognize this. The only way this will actually happen though is if we push our legislators to put restrictions on pollution and our emissions.