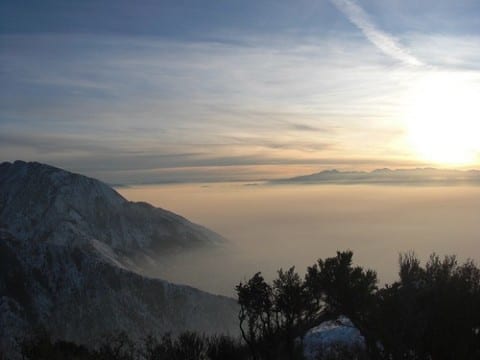 As I drive into the “fog” of the valley from the mountains, the temperature drops and I feel like I have to cough. We have red air days in Salt Lake City. Being one of the fastest growing cities in the country comes at a large cost. Bad air quality negatively impacts the livelihood of Utahns between the months of December to April. In fact, many times the Salt Lake Valley has worse air than Beijing, concentrating as it does among the most densely populated areas along the Wasatch Front and Cache Valley.

In addition, air pollution proves much more dangerous in winter months due to an inversion, which happens when the bowl-like Salt Lake City Valley traps cold air beneath warm air. For days at a time, people are unable to go outside; vehicle pollution becomes trapped within the city while the bad air’s grayness builds in the air until the next storm comes to take it away. The lasting impact of air pollution causes “roughly 2,000 deaths annually relating to ozone and particulate pollution” according to the article American Lung Association ranks SLC in Top 10 for Worst Air Quality, resulting in an increase in strokes, heart attacks, respiratory disease, cancer, and premature death.

Pollution affects people in our area for the majority of their lives, even if they do not develop a disease. In fact, living in the Salt Lake Valley can be just as bad as being a smoker. A simple mask will not solve this issue because the particles are as fine as dust. In fact, according to the DEQ, in the article Experts Separate Fact From Fiction Regarding Utah’s Air Quality, “particulate matter is 1/20th the width of a human hair and can easily get through a surgical mask.” Consequently, although Utahns rally regularly for clean air, there seems to be little improvement in restrictions on refineries as they “cause smog and air pollution that get deep into our lungs and harms our ability to breathe,” according to the article Oil Refineries and Toxic Air Pollution. On the contrary, other sources say this is merely a myth and that by far the “largest source of emission pollution is from vehicles, which make up 48 percent or roughly half of total emissions along the Wasatch Front. Refineries and large industrial facilities represent about 13 percent of total emissions along the Wasatch Front” according to the article Experts Separate Fact From Fiction Regarding Utah’s Air Quality. Additionally, a recent study shows that if the speed limit was reduced on the highways by 10 MPH, the amount of pollution would decrease immensely; interestingly, Utah holds the record for the second-highest average speed limit in the country.Therefore, it is important that people make daily decisions to go the speed limit, use mass transit, carpool, walk and/or bike. Photo by andrey_zharkikh

Hailey,
I really enjoyed reading your article, even though it was about a very serious issue. I live in a suburb in Michigan and I never have dealt with smog or even pollution. Im suprised that lessening the speed limit by 10 MPH would help the pollution that much. I always thought that pollution is the worst when there are major traffic jams and there are hundreds of cars jam packed into one area. Am I thinking correctly as well in saying that?