Should We Ban Cashless Businesses?

Home Should We Ban Cashless Businesses? 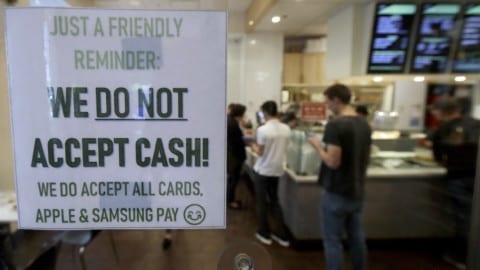 In the article, “Should Cashless Businesses Be Banned?” there’s a debate on whether to get rid of establishments that don’t accept cash. Some think it’s a good idea to do so while others think we should leave them as is.

Those in favor of banning these establishments say that cash is necessary as it’s our universal currency. They also say that the front of the dollar bill reads, “This note is legal tender for all debts, public, and private.”, yet many businesses recently have decided to stop accepting cash. They also believe that this is not acceptable because many people don’t have access to a credit or debit card, but everyone does have access to cash. It’s better to give the customer the choice to pay however they want whether it’s credit or cash.

On the other hand, those that think we should allow these establishments to only use credit think it’s beneficial. Our world is changing and the use of cash has dropped significantly, in 2012 cash was being used for 40% of payments and since 2017 that share dropped to 30%. Nowadays everything is more digital, it’s all we use especially teenagers which is why it’s easier to be paying from your phone. And after high school, these young people will turn to debit cards. Not only is it a better option for customers to use credit cards, but it’s also more convenient for business because there’s less of a chance for robbery because they won’t have cash. It will also make lines go by faster since the employees won’t have to be counting the change to give back to the customers.

I’d say that in the times we’re living right now with the Coronavirus it’s more convenient to use credit cards because not everyone will be having to get each other’s cash since you would just be using your credit card. But like those in favor said not everyone has the option of having a credit card, so it’s better to just have it as an option to use card or cash.

Do you prefer to use cash or credit cards?

This is actually an interesting topic and something I had never really put much thought into. Personally, I think every business has to be able to accept cash. There must be a currency that is valid everywhere in a nation for the economy to thrive as it should. I think places should encourage the use of credit and other payment methods but cash should still be usable everywhere, even with a pandemic going on. However, that’s just my opinion. Great Job!

I think that it should be up to the business if they use cash or not but if it is something that is an essential business I would say that cash and card should be allowed.