Should the Voting Age Be Lowered?

Home Should the Voting Age Be Lowered? 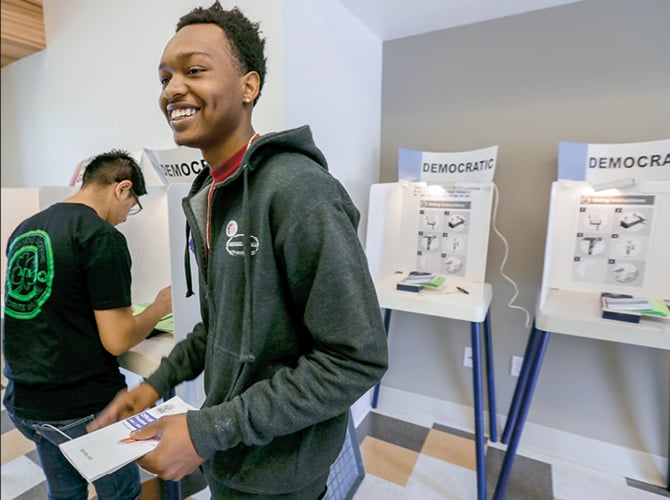 The article “Should the Voting Age Be Lowered” (Upfront, September 3, 2018), talks about how people under the age of 18 are unable to vote. The 26th amendment of the United States Constitution lowered the voting age from 21 to 18 after it was ratified in 1971. Young people in today’s world have started a wave of opposition to this pushing for it to be lowered further. The article shows the thoughts of two researchers who have opposite opinions about the topic. The first researcher, Laurence Steinberg, is in favor of the thought of lowering the voting age. He acknowledges that critics will question the ability of teenagers to make important decisions such as voting. He argues this by saying that teens aren’t as “hotheaded”, if you will, in important situations like voting. Steinberg also points out that recent studies have shown that by age 16, young people can gather and process information, weigh pros and cons, and reason logically using facts. The opposing researcher, David Davenport, argues that voting requires a higher level of civic responsibility and knowledge. One of the critical points of his argument is that he states that if we don’t allow our 16-year-olds to join the military or serve on juries then they should not be allowed to vote as he puts voting in the same tier of importance as those two duties.

I agree with David Davenport that the voting age should not be lowered. In fact, I think it should be higher than 18 to at least 21. The problem with today’s generation of teenagers, more famously known as generation z, is their reliance on social media. Social media constantly pushes a certain political narrative with the intention of programming the minds of our youth to believe a biased opinion is a fact. This has created the toxic culture that is generation z. The creation of this ignorant youth culture is the product of exposure to fake news not just on social media, but on many other forms of media. As Davenport stated, their brains are not even fully developed yet meaning they have not fully developed essential skills such as moral reasoning which is critical when voting. I think it is best to educate our youth on politics and the law before they make any sort of decision like voting. Putting the fate of our country in the hands of the ignorant would be our doom.

Do you think the voting age should be lowered and if so, why?