Should the United States decriminalize Drugs? 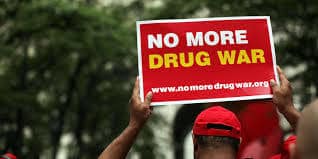 The United States does not tolerate drugs at all, since Ronald Reagan started the war on drugs. If someone is using drugs they are not scared of the consequences from the federal government, they are just thinking of the best way to hide it from authorities. More people are being incarcerated for petty crimes that involve drugs, than any other crime combined. Almost 50% of inmates in federal prisons are in for drug offenses, and in state prisons 16% of inmates are in for drug offenses. That is about 207,000 inmates in federal prisons, and just about 1,400,000 inmates in state prisons. Putting these people in prisons is not doing anything to stop the drug issue in this country.

If the United States is to follow the Netherlands, Portugal, Spain, and Italy in decriminalizing drugs, it would benefit us more than ever. People are being saved by special works in place that make sure no one overdoses on drugs. The country would be much safer with less violence. We would have more money to put toward much more important things, more space in prison, and no need to build new ones. The UN has partnered with many different organizations, including health groups, like the red cross and the American Public Health Association, which all have endorsed the decriminalization of  drugs. Why won’t the US government, stop looking at what will benefit them the greatest, instead of what will benefit the citizens of this nation the greatest.