Should The Minimum Wage Be Raised?

Home Should The Minimum Wage Be Raised? 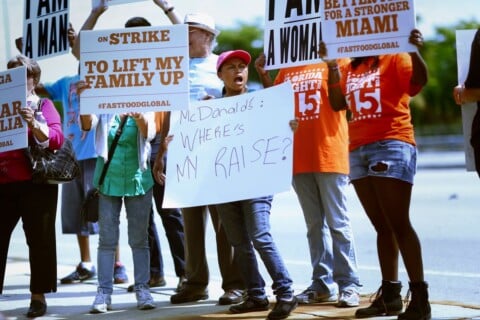 In the article, “YOU DECIDE: Raising the Minimum Wage” (McGraw Hill) I read about the pros and cons of the hard decision of raising the minimum wage or keeping it as it is. For many current cases, people making the minimum wage of 7.25 struggle to find ways to live and for that reason it has come to the attention that a majority of low income working families protest against the current wage. The protests that people are making are beginning to catch the president’s attention as he and The Congress are considering raising the federal minimum wage. It is understandable that these people want more but have they considered what could happen after (if) it’s raised?

I think that it is insane how many people are outside in the streets, having to live off asking people for money. Raising the minimum wage will dramatically change a lot of people’s lives but some for the better and some for the good. If it is ever raised to at least 15 dollars an hour, the good in this is that about 900,000 people will be raised out of poverty. 15 dollars an hour can be beneficial to a lot of families as it ensures a living wage to them. It will take time for this change to happen but President Biden is in full support of this and the slow increase by time will give the economy and the people to adjust to these living standards. Everyone would love a raise in their paycheck every weekend but have they considered the people who will actually lose their jobs because of it? Approximately 1.4 million Americans will be in danger of falling off the bracket and losing their jobs. Also, many states are beginning to raise the minimum wage so it will not be necessary and will just cause problems to the economy. If anything, the U.S is currently good at where it’s at.