Should Students From College Get Paid For Doing Sports?

Home Should Students From College Get Paid For Doing Sports? 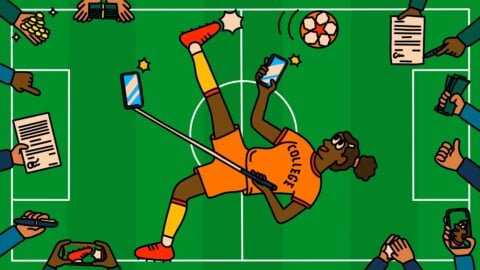 In the article “College Athletes,” I learned that smallers school might have to dissolve their athletic programs altogether because it might not generate enough funding to pay players. This Foolish that students should be treated as employees Although the NCAA claims college athletes are just students, the NCAA’S own tournament schedules require college athletes to miss classes for nationally televised game that bring in revenue. College Athletes are hiring agents in order accept money from advertisers. This has become a california law alone with several other states. success in college sports is also believed to improve the application rates and caliber of admitted students at certain universities.

Should college teams pay their players?
0
Please leave a feedback on thisx

I think what happening to these college athletes. Is Foolish because the students are receiving a paycheck. It must be easy to imagine student – athletes haven’t yet been paid, It’s unclear what further effects a new policy could have, especially in terms of which athletes are paid the most.

I am impressed by your post, “Should Students From College Get Paid For Doing Sports?” because it is foolish how students can get paid but not athletes.

The athletes and the school is what make them stand out. Them having to miss class to go and play a game, and not getting paid is foolish. The revenues get so much profit, for the athletes to not get paid. Being a student-athlete can be very stressful because of having to focus on their sport but also trying to find a job to maintain themselves. If they get paid it can be life-changing for them.

Hey Arlette,
I found your article very interesting because I completely agree with the fact that college athletes should be getting paid. The athletes and their name are what makes the school most of their revenue. Although, I don’t feel that athletes should be paid by the school since most are on scholarship, instead, allow them to get paid by things like sponsorships and endorsements. Being a student-athlete can be very challenging because of trying to find a job, working the job, making workouts, and trying to find time for homework. It puts a lot of stress on the athlete and I feel that if they since they are allowed now, to make money off their name, that a lot of that pressure goes away. They can finally focus on important things.
Thanks for your writing! I enjoyed it!

I liked this post, really interesting stuff. I think college athletes absolutely should be paid, first because many students can’t afford schooling any other way, and second because these student athletes work hard. Even at smaller universities, these teams are working out usually once a day in the early mornings to make time for their classes, taking time away from school to compete, etc. From a student’s perspective this entails a lot more work. I like that you mentioned advertisers, because this is still a way for students to get money. Unfortunately, many time this goes right back to the college in the form of tuition.

I agree with you that college athletes should have the ability to be paid. However, I believe the athletes should only recieve payment from sponsorships or other organizations, rather than the schools. If schools are able to pay players, then the playing field will quickly become unfair, as super rich schools are able to recruit the best players, leaving the poorer schools with no good players. I’d love to learn more about this issue as it progresses!

Dear Arlette,
I agree with your argument that students should be getting paid to play college sports. I also agree that there is no necessary reason for these athletes to have money from endorsement and advertisement deals to have their money revoked because they violated a contract that is based on the premise that they are students and not athletes. Colleges have to do everything in their power to bring in as much economic revenue each year, and having popular athletes may draw more endorsement deals and may bring in more revenue, which could possibly benefit the school. Overall, I agree with your conclusion and I agree that student athletes should be getting paid to play sports in college.

Dear Arlette,
I am really happy with your post, “Should Students From College Get Paid For Doing Sports?” because I 100% agree with them being paid.
One sentence you wrote that stood out to me was when you said “Although the NCAA claims college athletes are just students, the NCAA’s own tournament schedules require college athletes to miss classes for nationally televised games that bring in revenue.” I think this is effective because the atheletes are really brining in a lot of money from televised games.
Thanks for your writing. I look forward to seeing what you write next, becuase if it is about athletes of any kind, I will be back for sure!

Raymond, how would you propose colleges begin to pay their athletes? Where would the funding come from? Lastly, do you think by paying these athletes would chose this college solely based on their student athlete salary?

Dear Arlette:
I agree with you posy i believe college athletes should get paid for their likeness. Because these huge schools make millions off of these athletes but the college athletes don’t see a cent from that. I also like how you included that they are being treated as employees but aren’t paid and i like how you talked about how california has already passed a law for student athletes to get paid.