Home Should Schools be allowed to limit students’ online speech? 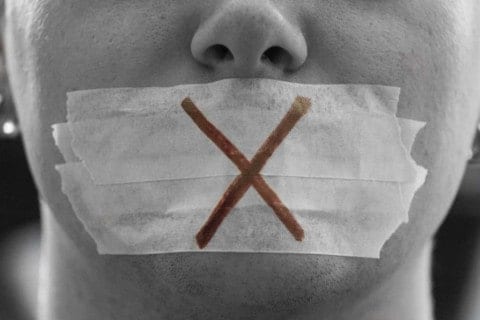 How far does our First Amendment protect students? This is a question that does not have a defined answer yet. Many people believe students speech should be limited. Such as in the Tinker v. Des Moines case, the Supreme Court decided that students’ free speech does not end at school as long as they are not disrupting the school setting. This ruling can be complicated as it is very difficult to know when a students’ speech has become a distraction. Schools should not be allowed to limit students’ online speech because most of the time cyberbullying has no effects, schools are also abusing their power, and because there are more important issues occurring.

With the rise of the internet, cyberbullying has had an increase in society. According to a survey of British School Teacher conducted by the Association of Teachers and Lecturers and Teacher Support Network, only 15.1% of teachers have been victims of cyberbullying and 38.6% shows that it has had no effects on them. This survey shows how schools cannot limit students’ online speech because in the end people know how to deal with it and it really has no effects on people.  Also, according to the same survey, 41.9% of those who cyberbully teachers are unknown. Which becomes an issue, how is a school going to punish someone is they do not know who they are? Essentially, schools limiting students’ online speech is an unrealistic goal.

Schools have a lot of power amongst the students; schools are beginning to abuse their power. J.S. v. Mountain School District, shows a student being suspended for creating a profile of their principle. One may think that creating this profile was crossing a line, but the student was only expressing their opinions and not creating any disruptions during school time. The Supreme Court stated, “the School District violated J.S’s First Amendment free speech rights when it suspended her for creating the profile.” This demonstrates exactly how schools are abusing their power; schools should learn when it is okay to give students consequences and when it really becomes unconstitutional. Therefore, it is shown that schools abuse their power so they shouldn’t be allowed to limit students’ online speech.

Cyberbullying can be an issue in today’s times, but there are more important issues. In a political cartoon by Jimmy Margulies, it shows a teacher complaining about how his privacy was stolen. This is not a valid reason to limit a students’ speech because it is granted in the First Amendment. The teacher complaining about his privacy being stolen is the same thing as if a celebrity complained about the press. The principle in the same political cartoon is saying, “what’d they steal this time… credit cards… bank accounts… Social Security numbers?” This goes to show that there are more important issues going on in the world that actually affect other people.

Overall, schools should not be allowed to limit students’ online speech because schools already abuse their power, there are more urgent issues in the world, and cyberbullying essentially has no effects on most people.

The censorship in online forums of students is something public schools have a limited ability to do. Unlike private schools, students do not sign a release stating that they wave many of their constitutional rights, including that of free and unlimited speech on any platform. However, since the Morse v. Frederick, 2007 case, schools are in fact able to limit speech of a student when it is speech that goes against the agreed upon school policies (https://judiciallearningcenter.org/your-1st-amendment-rights/).

When it comes to cyberbullying, it is not so much the teachers that the schools need to worry about, but rather the students. Teachers are more likely going to be better able to cope with online abuse than students are. Teachers often have support groups that are stronger than what students have because of the relationships they built through college. Teachers are going to have the higher statistic of coping better, but students are going to be more endanger emotional and physical harm. It is also a trend in which students who are cyberbullied are more likely to be bullied in school (https://ajph.aphapublications.org/doi/full/10.2105/AJPH.2011.300308). Students who were either victims of cyberbullying or also the offenders, are more likely to have suicidal thoughts along with attempting to take their life (https://www.tandfonline.com/doi/abs/10.1080/13811118.2010.494133).

The other problem of cyberbullying and online speech being entirely unlimited for students is that it may be pushing students to begin using drugs and alcohol. Both of which can permanently damage a growing brain. Schools do have the authority to discipline a child who is using drugs against their policy, however, the drug use may be rooted in a cyberbullying incident and becomes the coping mechanism for that student. When this happens, schools may often be looking just to get rid a of a “druggie” rather than providing the support that the student may need and allowing the problem to continue (https://cyberbullying.org/cyberbullying-and-substance-use).

Although public schools cannot regulate speech when it does not cause a disturbance, they do have the authority to stop a student from placing another student in a situation that may cause them to take their life. The Supreme Court has come to the decision that when speech becomes a threat to security and a person’s life, the school may appropriately discipline a student. Online content posted by a student that places another student in situations that will cause him or her to attempt to take their life, self harm, abuse substances, etc. should be within a public school’s jurisdiction in that the school may help to actually save a life.

Dear, Jennifer
I agree with what you want to prove with this post and image. Should Schools be allowed to limit students’ online speech? because people have there right but to a extent were they see your point. The image shows a lot because a lot of people feel like they can’t speak.
One sentence you wrote that stands out for me is “victims of cyberbullying and 38.6% shows that it has had no effects on them.”
Thanks for your writing. I look forward to seeing what you write next, because it showed that people do look forward to it. You also write really good.

I am intrigued with your essay about online speech because you started with a strong hook and followed with a good thesis. Your essay was clear and easy to read with proper grammar. You also include your sources very well and explain them thoroughly. One sentence you wrote that stands out for me is ” Essentially, schools limiting students’ online speech is an unrealistic goal.” I think with is powerful because it shows that it really is a goal that will not be achievable as much as people want. I understand your point of there bascially being too big of a goal to all of a sudden throw out a goal. Thanks your your writing. I look foward to seeing what you write next because I also have the same idea as you. You explain very well why the online speech should not be restricted.
–Alexis Gutierrez

I really like how you started with your first sentence. I also like how you mention limitations on online speech is an unrealistic goal. As well as your writing being very clear and easy to read

Wow. This is such a phenomenal writing. I was left highly impressed after reading this. Your writing is BEYOND amazing. I cannot wait to see more of your writings!