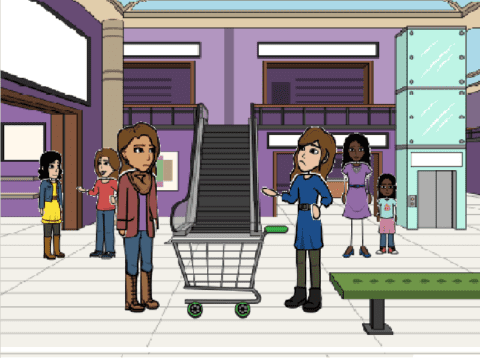 Abby and Hannah are your average pair of college students rooming together. They went to IKEA, and they planned on leaving in a timely fashion with their furniture. Unfortunately, they didn’t plan on getting lost. It’ll take a lot of searching, some phone calls, and one frustrated employee named Ruby to get them out of this store.

Coming up with this concept was difficult, not because of the concept itself, but because I was going about things wrong. I tend to write longer, more in-depth stories, so when faced with the necessity of a short story, I had difficulty coming up with an idea that would fit into the time limit. However, once I began to think of more simple conflict ideas, it became much easier.

Writing the script was not especially difficult. Once I had the concept in mind, writing believable dialogue was fairly easy. Making the storyboard was difficult, but that was only because of the site’s poor performance. Doing anything required at least a solid minute of waiting, which made precision difficult. Creating the final product on Scratch was very challenging due to the amount of boxes I had to put in. I also found that on numerous occasions, dialogue would overlap each other due to miscounted “wait” boxes, and I would need to pinpoint where the issue was, which would be fairly time-consuming. Additionally, when there was an issue in a later part of the story, I needed to wait through the whole thing before I could find the issue; I did not know how to start from the middle or end.