Shame On Us: Protecting Animals by Jailing Them In Zoos

Home Shame On Us: Protecting Animals by Jailing Them In Zoos 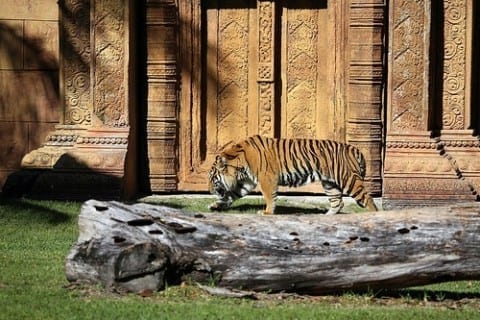 When I was in middle school, we always went to zoos. It is a good way to know animals and to know what they look like and what they eat. It is interesting to see the funny actions of animals. When you give bears some food, they will close their palms, which means thank you in China. Zoo keepers teach animals how to attract tourists. Those animals are trained to do a lot of actions to attract tourists and earn revenue for zoos. Is it humane to train animals to do something that does not obey their natural instinct? Should we decrease the number of zoos?

What is the reason for establishing zoos? I think that we want to educate people so that they know it is vital to protect animals in zoos. When people are familiar with animals, they will pay more attention to animals and try to protect them.

However, when we set up a zoo, the first thing we do is catch wild animals. The second thing we do is put them into cages. The third thing we do is train them. It reminds me how policemen catch criminals. They catch the criminals, put them into jails and then rehabilitated them. Unfortunately, the way we put animals into zoos is like the way we put criminals into jail. Animals in zoos are similar to prisoners in jails. We never feel ashamed when we put animals into zoos that are like jails; instead, we are proud of what we have done to animals. We think we are protecting animals. We think animals are safe when they are prisoners. Shame on us to think like that.

As humans, we fight for freedom and equal rights. Everyone needs freedom–woman or man, black or white, poor or rich. Freedom is the most important thing for us. Living without freedom is torture. The irony is that we deprive animals of freedom for a ‘good’ reason. But, are we protecting them or torturing them? Weeks ago, I saw a video about a tiger in a cage. tourists threw branches to the tiger. The tiger did not do anything like a cat might do. As I know, tigers are dangerous, ferocious and easy to anger. What makes the tiger like a cat? Loss of freedom. We have already changed the tiger. The first time the tiger in the zoo yelled at people, zoo keepers disciplined the tiger. But, yelling is the tiger’s instinct. Zoo keepers are depriving the tiger of its instinct. When tigers are not ferocious, are they real tigers? If they are not real tigers, they cannot teach us what a tiger is like. Instead, when we see a tiger, we might describe the tiger as a huge cat. If we cannot know animals from visiting zoos, then we do not need zoos. We should put these animals back to where they belong– in the jugal.