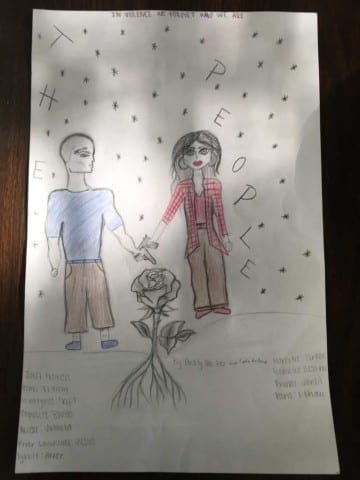 For my modern interpretation of Romeo and Juliet, I decided to work on a movie poster that represents an event in 2017. For example, there have always been gangs that are rivals with each other and create plenty of violence. I specifically choose Bloods and Crips because those gangs are commonly known, everyone has had someone in their family in a gang so I thought it was important for us as a community to understand the concept of gangs.

I also decided to show them holding guns because I wanted to connect it to the violence in Oakland with people surrounded by guns.

Lastly, I drew a rose growing out of the concrete connecting it to 7th grade because it represents that there is always going to be obstacles but that doesn’t mean you have to stop growing.

This shows that we as a community can keep growing and bringing awareness just like Dante in Romeo Is Bleeding.