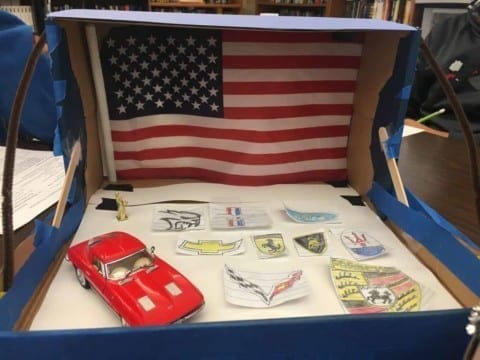 This is my Shadow Box. What is a Shadow Box? It’s a shoe box with objects that represent your identity, but it can be more than that. It can be a way to tell your counter narrative. A counter narrative is a story told by an oppressed group to counter dominant narratives. A dominant narrative is a story told by people with privilege and power, and are the stories that set stereotypes about oppressed groups. But back to my Shadow Box. My Shadow Box is split into different sections. The back shows assigned identities. Assigned identities are parts of you that you were assigned, that you had no choice over. One of my assigned identities is being born in the United States. That’s why my box has the U.S flag. The bottom part represents one of my chosen identities, which is cars. I have liked cars since I was little, and I chose to put logos of some famous cars (and car companies) to represent this chosen identity. I also put the Statue of Liberty in the chosen identity section because I have been to New York, which is on the other side of the country. The Statue represents traveling, because I choose to travel and I like to travel. The blue wrapping and white middle represents the Guatemala flag. If you look at it from above. You can see it more clearly. This box represents my counter narrative because it shows that not all Oakland kids are uneducated. Me doing this work breaks that stereotype.

I’m very impressed by your shadow box. While scrolling through all the shadow boxes yours really stood. I liked that your shadow box had a very clear focus on one of your main identities which is being interested in cars. I especially like your inclusion of the red model car in your shadow box because it really emphasizes your interest in cars and how strong that identity is. Thank you for making such a great shadow box for me to look at.

Hi Anthony,
I am glad to see a project like this becuase it makes me think of sterotypes and how they are often wrong or only partially true. People prejudge and make asumpions all the time and fighting back on these to create a better society is a key issue today. The symbolyism you have used is great.
Thanks, Simon