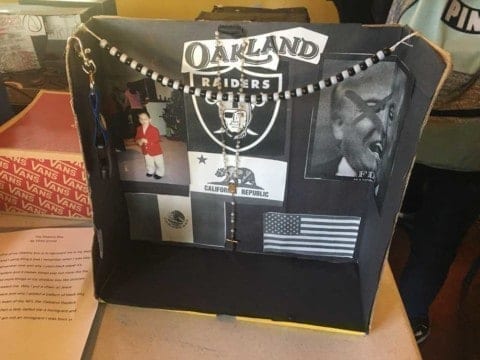 Being a mixed ethnicity has impacted my life because people think that I crossed the border to get into the United States. I am mixed with Mexican and Honduran. This has impacted me because people who don’t know me are wrong because not every Latino is illegal and I hear people behind my back talking  about me. For example when I went to costco and I was getting eggs and milk in the back of the store a white female called me an immigrant and then I said “ You’re a fucking bitch and I hope you go back to your abusive father and your fucking slutty mom and I hope you fucking kids go to hell you bitch.” I was pissed off because people can’t just assume that you’re an immigrant  just because of your race  your parents were born at. This affected me because I do not want racism to affect my life because i can’t let someone to bully me because of my race. I am proud of being a Latino because we are strong we would fight back if something isn’t fair to the latino community.

Another part of my identity is having supportive family this impacted me because my mom and dad have supported me in my education in my lifetime  and my mom and dad want’s me to be the first one to go to college in my family and they want me to have a well paying job and they want me to be a doctor when I grow up. An example of how my family has stayed strong is when Donald Trump was elected president, by thinking about the future not the past and moving forward in life. The fact that Donald Trump became president made my family a little bit nervous because if both of my parents get deported then I don’t know where to go. We have stayed positive by not thinking about it and the plan is if they get deported I would have to go and live in my cousin house. This shows that we have stayed strong because we have been planning if I.C.E comes to my home. In conclusion, this has affected me because I have been called many things in the past and that has in powered me to stand  for myself in the world. And my my claim was being male being supported by my parents and being because they would remind me by doing my work mixed ethnicity 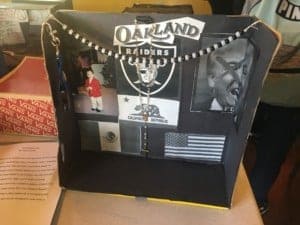 The objective of my shadow box is to represent me in my lifetime  being alive and I using thing’s that I remember when I was little and thing’s I remember now and why I used black paper it’s because of the raiders and it makes things pop out more like the chain and I can add more things to my shadow box like pictures more things that represent me. Why I put a chain of Jesus because I believe in Jesus and why I added a pattern of black and grey because I go for the team of the NFL the Oakland Raiders. One dominant narrative I when a lady called me a immigrant and one counter narrative is that I am not an immigrant I was born in the United States of America

Dear Victor,
I really like how your shadow box is showing how you are a big fan of the Oakland Raiders. How it also shows that you are from the USA but also Mexico, I really love how you showed that you don’t support Trump. But something you could have done was put him on the outside to show he is the person creating more stereotypes about mexicans.

Thank you for sharing your work. My name is Long Nguyen and I am a student at Fremont High School.
Something I liked about your work was that I also love the raiders and you were very creative about your work.
Something I have a question about is why did you write a red X mark on Donald Trump’s face. Please feel free to comment on my work in the future. The address of my student blog is https://longnfhs2021.edublogs.org.
Thank You!

Dear Victor Corral,
Your story about your shadowbox is really interesting from my perspective because you talked about how your ethnicity or identity effects you from the stereotypes that people assume. But at the same time I really liked your explanation behind your shadowbox of how it connects to your childhood and your favorite sports and team. And you talking about the election of Donal Trump and how it has impacted your family that connects to me because i’m from Guatemala and also my parents. And I know and I have taught of the same thing about what would happened to me if my parents get deported and my little siblings that were born here? It’s a question that other Latinos or Hispanics may have asked to their selves because now that we are under a president that does not really respect our culture and race its really difficult to maintain the happiness and a good life that we want because he is taking opportunities that we as latinx people want to have. But I really liked that you said that you and your family always “Stay positive” because there is better and important things in life that we as teenagers have to focus on like our education. And I hope you write more about your stories and thoughts because we all have a different life and thinking that makes us unique.

Some questions that I have for you are:
What do you think about the numerous of immigrants coming in the USA this past years? especially Juvenile teenagers.
If you could get to play sports would you play football in the Raiders team?
If Donald Trump gets fired as president in the government how would you feel? And who would you like to overtake the presidency?