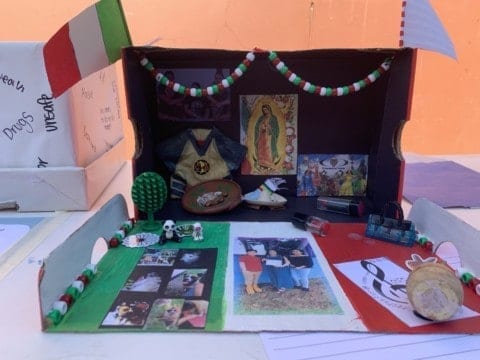 Who I Really Am

Hi, I have done this shadow box to show the Dominant Narratives (what people think of me) and my Counter Narratives (my truths/the real me). In my shadow box I have added two flags one Mexican flag and one from the U.S.A. These flags represent where I’m from, for example, my family is from Mexico but I was born in the U.S.A. which makes me Latina and because of that people assume about me. To begin, people believe that I’m lazy, girly, and that because my family is Mexican I have to be part of the Catholic religion. Some even tell me that I’m privileged and ask me if I come from an immigrant family. But, those as I said, are Dominant Narratives. But what is true is that I am a hard working, outgoing, smart girl even if I’m not book smart I am smart in my own way and those are my Counter Narratives, my truth. And I believe that it’s not true that I’m lazy because I work hard each and everyday to be in the place I am in now and to have good grades because I know the struggles my parents went through to be here in America and try to give me and my siblings the best lives we could ever have. I also think that I’m not girly. I may be outgoing and self confident but not girly and that is why I added a small perfume, lip stick, and a purse in my shadow box because people say that I wear makeup and do my nails because I’m girly but in reality i’m just that girl who loves to enjoy life and loves being around animals. Lastly, people say that I have to be part of the Cathlic religion which I am but I also have a second religion which Im proud of and it’s called “Mi Religion Es Yoruba” that’s why I decided to add a picture of la virgen de guadalupe next to my other religion picture to show that I don’t only stand by one religion but by two but in both of my religions we believe in god because as they say “You can’t do anything without God by your side” and I stand by that phrase!

My name is Xhitlali and I am currently a student at San Jose State University. I really love your box idea and how you chose certain items to symbolize aspects of yourself! In particular I love that you put both the Mexican and American flags and that you included the Virgencita in the middle as I know she is a big part of Mexican identity. A statement that stood out to me was, “…people believe that I’m lazy, girly, and that because my family is Mexican I have to be part of the Catholic religion. Some even tell me that I’m privileged…” The last portion about privilege in particular really caught my attention because I feel that “privilege” is an aspect people often project onto the children of immigrants, especially towards first generation students like myself (and perhaps you as well). I have been told by my peers and even friends that I am “lucky” to get certain scholarships based off my first generation status and that I’m “lucky” to be able to get through college that way. This is a belief that gets normalized and as you mentioned, people often think we’re “lazy”. I think you’re very bright to counteract that by stating that you are, in fact, an extremely hard worker and I admire that you have such confidence in yourself and your abilities and that you are shutting out those negative stigmas- so props to you!

Great job on your box and your post! I really enjoyed learning more about you!

I am currently a student at San Jose State University. I have to say that im truly amazed at your work. You showed passion for it and you expressed yourself in a way many can’t. I love the fact that you don’t let what people say about you reflect how you see yourself. People often judge what the see on the outside but don’t take the time to actually get to know the person that we truly are. When it comes to school, I try my best as well, I know the struggle parents go through to give their family the best life they can and it’s on us to make their efforts and struggles worth it. I’m sure your parents are really proud of the person you’ve become so far, of the things you’ve done and what you will accomplish in the future. Keep being confident, “girly” and never stop being you. Thank you for showing your shadow box and sharing a part of life, I hope more people can connect to it like I did.

As a Mexican American just like you, I can relate to some of society expectations. I definitely related to the expectation to be Catholic. I loved how confident you are with yourself and how you turned any negative assumption into something good. I found it interesting how you deflected the term “girly”. I don’t think being “girly” is something bad and or something you should be ashamed of, but I understand if you do not want to be associated with that term. If you enjoy being with animals, you should for sure looking becoming a veterinarian. The items in your shadow box really reflected what you talked about, the dangling beads were a nice touch. Good Job!