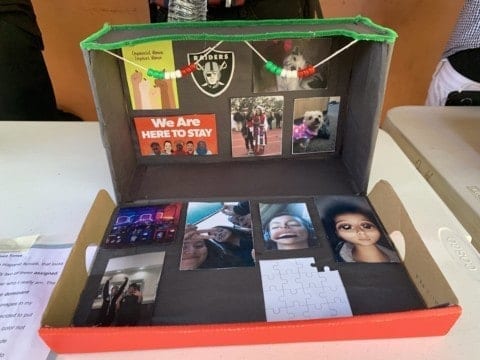 When people look at me, they see a Hispanic female, that looks emo according to everybody. While only two of these assigned identities are true, they don’t tell a stranger who I really am. The black on the outside of my box represents the dominant narrative that I’m emo/goth and anti social. All images in my shadow box represent my counter narratives. I decided to put black on the inside of my box because it’s my favorite color not because im emo or goth. It was important for me to include images of two of my closest friends to show that I actually do have friends and that I’m not anti social. I included a puzzle with a missing piece, this shows I feel misunderstood or out of place. Another thing I included was a picture of my siblings because I feel that I have a better relationship with them than I do with my parents, even though my siblings tend to misunderstand me sometimes. Some people may assume that I’m an immigrant because of my race but I’m not. I have decided to add an image in my shadow that says “we are here to stay” even though I am not an immigrant I put that picture to show that everybody belongs here no matter their race. Another image I put was of the Oakland Raiders to show that I’m from Oakland and I’m proud of where I’m from. Lastly, I included an image to show that one of my assigned identities is being female. The image represents female empowerment and that women are strong, we aren’t weak as many tend to say. Many of these objects represent my true identity and my counter narratives that I hope I’m representing.

Hi I am an Freshman in college at San Jose state university and was reading your blog. I love how you showed who you are to people that is deeper than the surface level ideas that many people have. By getting to know who you are I was able to open my eyes about how you are not the person that a majority of people perceive you to be.