Sexual Harassment: How it is Dominating the Workplace

Home Sexual Harassment: How it is Dominating the Workplace 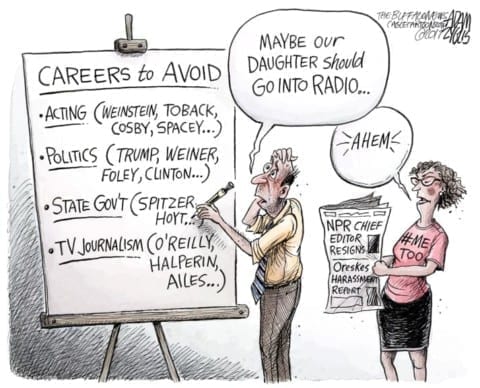 Sexual Harassment is a predominant topic in today’s modern day society. The number of sexual assault complaints has increased, as more and more women speak up. This number is worrisome, as is possesses a threat and fear to the workplace environment. This topic intrigues me because as a woman, we need to let others know that our human rights must be respected. Therefore, we must put an end to these acts of sexual harassment. We cannot allow for men to believe that it is OK to disrespect the rights and the female body.

The most well-known sexual harassment complaints are those pertaining to Bill Cosby, and President Donald Trump. Both have been accused by multiple women claiming they made inappropriate comments and gestures towards them. Most recently are those complaints against Harvey Weinstein. As a result, the “Times-Up” movement and hashtag has surfaced around social media, in an effort to inspire people who are victims of sexual harassment to speak up against the perpetrator. Women are more likely to be victims of sexual harassment than men. Men are most likely to be the perpetrator than women.

In a 2017 MSN poll, it was found that 31% of people in the U.S have been sexually harassed in the workplace; 45% of women said they were sexually harassed compared to 15% percent of men. In 1992, the earliest year of government data available, about 5,607 sexual harassment complaints were made, mostly from women. The number increased to 9,456 in 2000. This number is worrisome, because rather than limiting the cases regarding sexual assault, it is increasing, and not much has been made to address the issue.