Series: College athletes should or should not be sponsored?

Home Series: College athletes should or should not be sponsored? 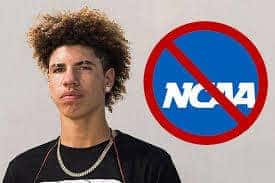 A major topic that circulates around College Athletics is that if College athletes should or should not be sponsored. The 2 clashing arguments are that “College athletes attend the school for  academic reasons, therefore other students on the campus should get the same benefit” and “The school is making money off the athletes, therefore the athlete should get some of the profits benefit”. When athletes that want to play at the colligate level are sometimes forced to take alternative measures because they and there family receive no income, every athlete has there own reason why they take these measures.

Out in the world right now, there is a certain family that has taken the world by storm. They are the Ball family. A quick summary of this 5 person business; started make noise in 2016 as they all played for “Chino Hills” High School Basketball team. The 3 sons in chronological order is Lonzo(20), Liangelo(19) and Lamelo(16), they all are very talented basketball players; all the brothers are currently playing pro on the L.A. Lakers and Prienai Birstonas Vytautas in Lithuania. Each member of the family at this point is bringing in some sort of income.

The eldest brother Lonzo was able to take the  one-and-done route by attending UCLA for 1 year then entering the 2017 NBA draft as the 2nd overall pick by the LA Lakers. Liangelo attempted to take the same route as his older brother did, with the same intent. Liangelo UCLA college career was quickly shut down after he had left the college after being with the team for no more than 4-5 months. Liangelo became ineligible to ever playing with another college basketball team, after signing with a agent and signing with the Lithuanian team overseas. The last brother of the trio, Lamelo did happen to sign with the team as well. Lamelo has a important role with the family business, on August 31, 2017 the Big Baller Brand announced that Lamelo was coming out with his own shoe, the NCAA later announced Lamelo ineligible because he was making “money” off his shoe; In reality Lamelo does not care about making money at this point because the BBB makes more money off merchandise than salary. There has been controversy off of Lamelo leaving High school to be homeschooled/get ready for the NBA draft, Lavar pulled him out of school early because Lamelo cannot play college basketball, so he might as well pull out now. The family is now currently under fire for pulling both younger brothers out of school which means they lose an education, but they decided to pull out because they couldn’t properly represent there brand while playing basketball. Controversy speaking Lavar pulling them out was a great idea, all of the boys have no intent of pursing any sort of schooling education, there whole life circulates around basketballl and they all have intentions of playing professionally; they are smart not wanting to waste there time playing college basketball.

Lavar Ball is the “anti-NCAA” we does everything to make them “busy” and violated  the rules with his sons. Lavar conclusion of ending events was to create a league for high school graduates to play basketball while earning a paycheck from ranging $3,000-$10,000. I can see many young athletes wanting to participate because it allows them to be sponsored before the NBA and earn a lot of money for them and there family. With the NCAA not allowing sponsorships of any kind, lots of young athletes are interested in taking this route.

Hi Ethan,
I think this is another great topic that you have brought up. In regards to the first part of your article I think that college athletes are already getting a good deal by getting there education paid for seeings as there is a very small chance to go pre. I also think that it was a smart move for the ball family to pull out there son of high school if his dream is to go play professional basketball. In all I am excited to see what else you find regarding your topic.