Separation of Church and State

Home Separation of Church and State 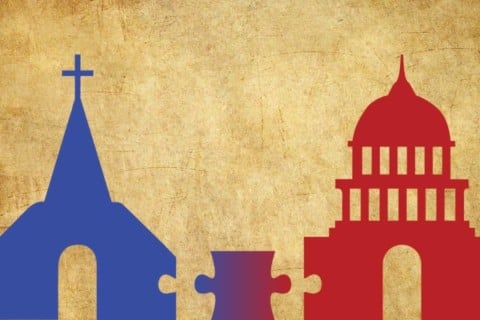 In a New York Times article, Susan Jacoby argues that the white house is tearing down the wall between church and state. Throughout the article, Jacoby explains several instances in which the white house used religion to justify decisions made about policy. Attorney General Jeff Sessions used a biblical justification for Trump’s policy of separating immigrant children from their parents and Sarah Huckabee Sanders said it was very biblical to enforce the law in regards to the same controversial policy. Scott Pruitt used Christianity to justify the use of natural gas and oil, and Betsy DeVos acknowledged that “some states will need more prayers and more action than others to bring about needed changes.” This convincing argument by Jacoby shows that there are countless examples of lapses in the wall between church and state within the Trump Administration.

Mugambi Jouet provides a slightly different perspective in his Huffington Post Article about the recent removal of the Ten Commandments from a public high school in Oklahoma. Jouet explains that the Supreme Court tends to deem things that are specifically Christian within public schools unconstitutional because they send messages to non-Christians that they are not fully accepted within that environment. This being said, “the Supreme Court has continued to authorize the mention of ‘God’ in the Pledge of Allegiance recited in public schools, the inscription ‘in God we trust’ on the dollar, and public prayers during legislative sessions or presidential inaugurations.” This is because most people agree that God is “neutral and inclusive of all,” as well as “symbol of public good, morality, and spirituality rather than a religious concept.” While this is true for the vast majority of Americans, it still does not take Atheists into consideration.

In conclusion, church and state cannot be considered completely separate in America. Although there are many cases in which the supreme has ruled in favor of separating church and state, there are still many references to God and the Bible in the government. While there are still many questions regarding the controversial debate of the separation of church and state, such as the founding fathers’ original intentions and the real meaning of the separation of state, it is important to first establish that Church and State are not currently separate to further discuss these issues.

Amy, I really enjoyed your thoughts and argument on the separation of church and state in the United States. You integrated the NYT article very well into your second paragraph. You were able to seamlessly paraphrase it, but also keep the amount of information and credibility from the author. This reminds me of a video we are watching in my government class right now. It is call “It’s a free country” and looks at the constitution in modern United States. https://youtu.be/Y4yYBpUot8o

Amy, you provided effective examples for your argument. I found the comments of Trump administration most compelling because they are currently in positions of power. It is important to highlight any biases or views that influence their policy decisions. This reminded me of the influence of the LDS church in Utah’s government. I found a Huffington Post Article, similar to the one you linked, that calls attention to the lack of separation between church and state in Utah. What do you see or experience as an effect of the influence of religion in government? I look forward to reading your response because this could lead to the majority religion ruling and oppressing minority religions, which is evident in Utah.