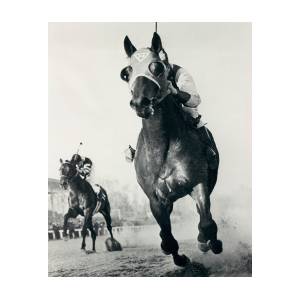 I just finished “Seabiscuit” by Laura Hillenbrand. I cannot begin to express how much I loved this book. I had the fascinating details and memorable characters of a fictional novel, but also the facts and real-world events of only the most well-written non-fiction. It is the tale of the underdog, a young horse who no one sees the potential for in the racing world, and the owner that took a chance on him and with risk came reward. The buyer is Charles Howard, trying to recover from economic travesty and the tragic death of his son. In Hillenbrand’s superb writing, even the horses we meet at the track for everything from stakes races to national championships develop their own distinct personalities. Seabiscuit is frisky and nervous in his stall when he’s not on a workout or in a race with other horses. His main rival, War Admiral, on the other hand, is much more difficult, bucking and baring his teeth at trainers whenever they try to lead him anyway. You are immediately drawn in once you start reading. Hillenbrand’s descriptions draw you into what seems to be a fictional world, surrounded by horses and jockeys, trainers and rivals, except that it’s all based on eyewitness accounts. Not until you read the acknowledgments at the end of the book do you know how much hard work and research went into the book. The trajectories of the characters and their personalities pretty much go along with the horses, at least for the jockeys. Red Pollard is a man who ran away from home to work in the racing industries, rising from a lowly bug boy to a top jockey, and loves what he does so much that he doesn’t want to stop even when he’s injured so badly that they think he’ll probably never race again. It seems like he can’t live life without being on a horse’s back, so it’s appropriate that Howard chooses him to be Seabiscuit’s jockey. On the other hand, Charles Kurtsinger is the life of the party, unpredictable and crazy, which makes him the perfect match to be picked as War Admiral’s jockey. Hillenbrand is able to connect with a wider audience because her writing invites in even those who have never seen a horse race in their lives. In other words, you don’t need to be a racing expert in order to read this book. All the drama and competitiveness of the racing world in the 1930s is right below your eyes, and she explains the nuances of reducing for both horse and rider during the racing season. Her explanations dive deep, probing the emotions and characteristics of racing officials and the main characters alike. If you don’t know what something is in the racing world, she guides you through it slowly with her gentle hand. Reading this book especially, I felt like a young child looking to an adult for explanations. These explanations are not written for children, however. They have all the gravity and punch of the people in this arena during the 1930s, the excitement and the competition. In short, you don’t have to know anything about the racing world in the 1930s to read “Seabiscuit.” Just pick it up at a local bookstore or library, and be immediately drawn in by Laura Hillenbrand’s immaculate telling of the rise of a horse no one ever expected to even race to become a national star and immortalized in our nation’s racing history.