Sam Robinson and His Hunt For Revenge

Home Sam Robinson and His Hunt For Revenge 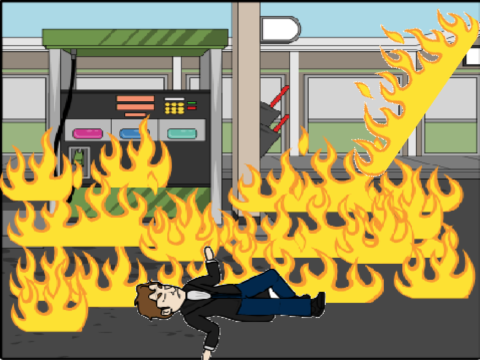 -The name of the protagonist is Sam Robinson. He starts off in the animation as a 6 year old who becomes an orphan. The name of the antagonist is Azviel (No last name). He is secretly a demon until it is revealed later in Act I.

-The conflict is that Azviel killed Sam’s parents when he was only 6 which left him an orphan. In act 1 there’s a brief scene of the murder happening, followed by the discovery of their bodies with much weeping. The second act is where Azviel reveals he is a supernatural being but is then cornered by Sam who is now 26 and has a magical revolver that can kill any supernatural being . In act three, Sam shoots and kills Azviel and ends his thirst for vengeance.

– The concept of my animation was based off of a popular show on Netflix and The CW called Supernatural, which had similar plot in which two brothers had lost their mother in a house on fire that was created by the demon to kill their parents. Based off of this I tweaked somethings to avoid copyright issues and began writing my story.