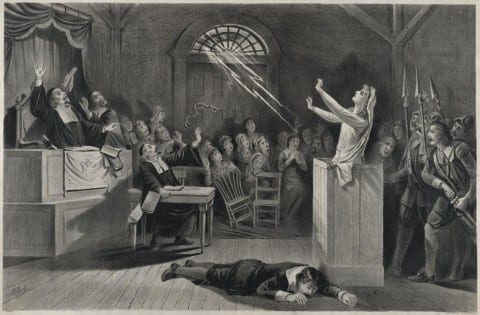 The Salem Witch Trials began in the spring of 1692, when a group of young women in the town of Salem Village, Massachusetts, claimed to be possessed by the devil. The girls accused several women in the town of witchcraft, and hysteria erupted throughout the town. A court was soon convened to hear the trials, and soon after Bridget Bishop was convicted and hung. Eighteen others followed her, and over 150 other men, women and children were accused. By September of 1692, the hysteria had died down, and public opinion turned against the trials. Since then, the story of the trials has become synonymous with paranoia and injustice. The community has since apologized and recognized the fault in the trials. 300 years later, the painful memories are still prevalent in pop culture, and everyone’s minds.

I’ve always found the Salem witch trials really interesting. I’m curious to see what else you find oht about it, good job Mae

I think this is a very interesting topic. I first heard about the Salem Witch Trials in middle school when I read “The Crucible,” by Arthur Miller. I found the trials absolutely ridiculous because the accusations were started by young girls and then the paranoia spread so fast throughout the town. Why do you think it took so long for people in Salem to realize that the claims of witch craft were false?

I think this is very interesting. The museum in Salem is really cool. It’s sad but interesting to see the replicated conditions some of those accused women had to live.

I find this topic to be very interesting. Nowadays you always hear about the Salem Witch Trails and know the general story but I have never thought to look deeper into the topic. I wonder if the hysteria in Salem spread to other cities too.