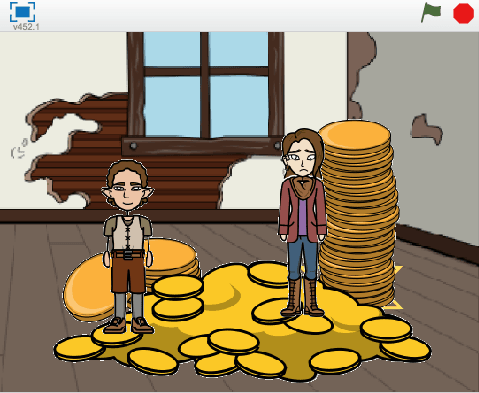 (As you can tell from this title), I made an animation based on the folktale “Rumpelstiltskin”. Rumpelstiltskin is about a girl who was told by her father that she could make gold. Due to this, the king held her captive for 3 days and forced her to make gold. If she failed, she would be executed. On the first day, she complains and suddenly, an imp pops up and offers to help. On the other hand, he asks for necklace in return.  On the second day, the innocent girl has to make a choice. She could give the imp her ring(which is the last memory of her mother), or she could fight back.

If she chooses to give the imp her ring, he makes her gold. On the third day, the king says that he would marry the girl if she would make gold. The girl calls for the imp and the imp asks for her first born child in return. Seeing that the girl won’t agree, he offers something and he makes her gold. He says that if she could guess his name in three days, he wouldn’t take her child. The girl guesses completely wrong on the first two days. The night of the second day, the girl decides to walk in the forest because she has nothing better to do. She encounters a small house and a voice saying “My name is Rumpeltiltskin! R-U-M-P-E-L-S-T-I-L-T-S-K-I-N! She’s NEVER going to guess my name!” The third day the girl guesses correct and the imp stomps out angrily.

On the other hand, if the girl chooses not to give her ring, the imp starts to walk off. The girl has a tantrum which really bothers the imp. They make a deal that if the girl never makes the whining sound again, he will make her gold. Regretting his decision, the imp slowly makes gold appear. Then, he comes up with idea that he could give the girl the power to make gold so that he does not have to make himself. The rest of the day and the day after, he gives her “lessons” for how to make gold. Finally, on the last day, the king came in and asked out the girl.

This is an interactive story that allows the audience (you) to make a decision.

When I got this assignment, I didn’t just start from there and made the animation. First, I had to find folktale where I can base my animation on- Rumpelstiltskin. I then wrote my script for the first act and act 2a and 2b. After that I “summarized” the story and but it to storyboard. This was where I had access to all of the sprites and backdrops. After finishing the storyboards, I transferred all of the “props I needed to start the animation. I worked on Scratch to get the final products.

These are a few screenshots of my scratch animation: 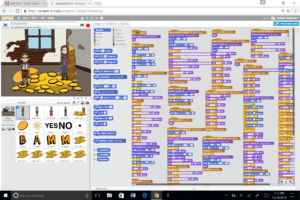 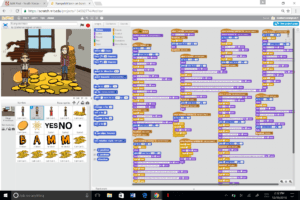 These are my storyboards: