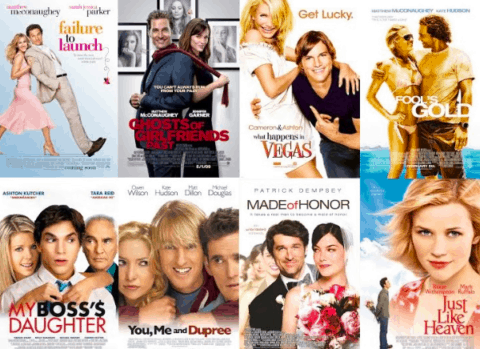 In an article by Cady Drell, the topic of rom-coms and how they are defined is discussed. In her article, she first explains how rom-coms viewed as a genre targeted toward women that have a core romantic plot with comedic elements. While this is a very commonly perceived notion, she goes on to point out how this view has negative societal connotations tied to it that a lot of people don’t consider. For instance, she states, “if we allow ourselves to lump any movie whose aim is to appeal primarily to women into a single genre with no regard to nuance, then we’re actually embracing just how little mainstream culture thinks of women in general.” She also raises the argument that society needs to include male-lead movies into their definition of rom-coms because “by excluding them from the genre, we’re not exposing them to celebrations of vulnerability and sensitivity.”

In this article by Chloe Angyal, she shares her own personal take on what she learned after watching all the rom-coms that had come out that summer. One of the opinions she brings up is that people poke fun at rom-coms because the romance that see in these movies is actually something that they want in their own life. She also points out how romantic comedies can be riddled with cliches but that it is still okay to enjoy them. Another discussion point that she brings is about the topic of sex. After watching several rom-coms she states that, “the most bizarre lessons that Hollywood rom-coms teach us about sex: You can only be open about your sexual desires with someone if you’re not dating them.” She also brings up how rom-coms promote the idea that “just sex” always becomes “true love.” Naturally she meets both points with criticism seeing as they’re usually not the case in real life. Another cliche she brings up with the genre is how they romanticize “persistence” when in real life repeated grand gestures and efforts to be with someone after being told to stop is generally considered “borderline stalking.”

In another article from Medical Daily, the psychological effects of rom-coms are discussed. More specifically, this article discusses the results of a study led by psychologist Matthew Gizzard at the University of Buffalo. In this study four groups of people were given a quiz on morals and then one group watched only rom-coms, another group watched only action movies, and the other two watched a mix of the two for five weeks. After watching the five weeks they were given the quizzes again and the study found that “the group that exclusively watched romantic comedies was more sensitive to four out of the five moral intuitions, excluding purity.” While the study showed that rom-coms can make us more sensitive, the article also discussed how watching this genre can also make us naive by romanticizing a “man’s ‘persistent pursuit’ of a woman.”