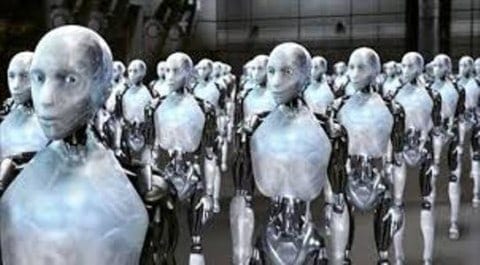 I think that robots are going to enslave us like in the movie irobot because If you make them smart enough with a good technology system and some human things then they are going to take over the whole world and not just in a bad day but in a good thing to like they going to help us on our work and jobs. They are going to b machines that help us out. But maybe if we make them very smart they might want to start killing people and that would be dangerous. The reason that it would be dangerous would be that they really don’t think about what they are doing. Robots don’t have feelings so they really are not going to care. Like in the video in youtube that they were harting the dinosaurs or the toys and the people still had feeling that they were doing something bad to them. Which means that they are going to be scared to protect themselves even though they really don’t have feelings. In the article it states that they are going to help us in the battlefield and I think that sometimes they are going to help us out. It could also be something in between like they could be our masters and they help us on whatever we tell them what to do and then our lives would be easier. Then it could also be than they take all of our jobs and then we would get ruled by robots if they are some bad robots like in irobot. There are a lot of things that are like robots like in the article it says that are google glasses and you can see through them and I think you can text and that’s how robots might get smarter