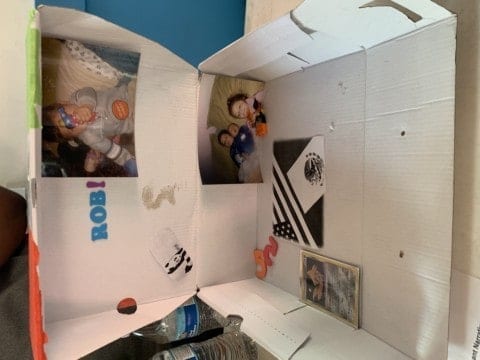 The objects in this Shadow Box represent Dominant Narratives. When people see me they see a drug dealer, alcoholic, and fugitive. While these Dominant Narratives may be seen everywhere on people It’s not true. I chose these objects in my Shadow box because It represents all of my Counter Narratives of who I am. My Skateboard, Legos, and Pokemon card says that I am very unique person. My Race is Mexican/American which means that I’m a bilingual person.  Some Dominant narratives people see me as is that I could have more power than others. My gender identity is a male which people see that males have more amount of power than a woman. Many people see that my skin is White which in their perspective they believe that White people have more power and money than others. Many of these objects represent some of my struggles but also growth and these are some counter narratives I would share in my Shadow box.

Hey Roberto, I am a college student at SJSU.
I enjoy reading about your shadow box because you are showing and explaining who you are as a person and not what other people seem to think. I enjoy learning about you, such as how you include a skateboard, legos, and Pokemon cards, to show that you are unique. I found that you added how some people would view you as someone with more power because you are male and a bilingual. Another thing that I like was that you included how the objects in your shadow box represent parts of how you struggled and how you learned from those struggles.

Hi Roberto! My names Briana Estrada, I’m a college student at San Jose State University. I really enjoyed reading your Shadow Box! I think this was a great project to express yourself and let your peers get a look into your life. I’m also hispanic so I could relate to some of the things you were talking about. I understand some people view hispanics in a negative perspective but as a community we should shine light on our culture. Also, you should be very proud you are bilingual! It will be very useful once you get to college. I’m glad you shared personal aspects of your life for someone like me to view. Thank you Roberto!

I am surprised for your work is so beautiful. My favorite thing is your photos.