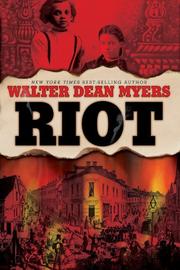 The book I am reading is called “Riot” by Walter Dean Myers. The book is in the form of a play and illustrates what the characters go through in 1863 as teenagers, some of color and some being men, drafted for the Civil War.

The beginning couple of scenes of Riot by Walter Dean Myers might leave a reader feeling hooked, shocked, and enraged because the main character Claire who is a black female struggles to have her other black friend receive a Job and faces racist people. An example of this is on page 46 a young Irish female says “That’s how the coloreds are. They’ll work for nothing until they chase us out and we’ll be the beggars and street sweepers. It’s in the bible!”

We learn something interesting about one of the characters, Claire on page 44 where Claire says “He knows that.” In response to her mother saying “We’d hate to see you hurt, Liam. Wouldn’t we, Claire?” This is not typical of how this character acts in this play, so far. Claire often seems to be very relaxed and chill, so far she hasn’t been interested in any boy drama. From the quotes I can observe that Claire has a crush on Liam who has a fiance, this may cause more drama later.

After this part of the play, most readers probably will be looking forward to reading the rest of this play because we will be able to get more information on Liam. We’ll also be able to see more of Claire’s relationships with Liam, her friends, and others. What’s probably going to happen next is an argument or fight will happen. Liam is married to a girl named Maeve who was being racist on page 46 towards Claire and others. This is very important with all the riots and fighting going on and Claire would most likely have to stand up against Maeve even if it hurts Liam.

Hey Jaylene! your book sound interested to me because many society issues are still happening nowadays, and people with plans for equality and justice are fighting since they do not still own what they deserve, freedom. When I read your post it makes me think of the privilege some people have, and take advantage of that power. One thing I am wondering is why were you interest in this book, and what will happen to Claire and her friend?