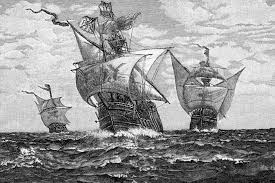 Has colonialism driven the flames of racism? This is the research question I wish to ask and argue in my paper. This is recurring throughout history, and has so much relevance in modern times.There are so many examples of this happening, and it raises a great question that spills into other situations in time. Here are some of the websites that will be used for my essay. This one, about Mugabe and his dictatorship in Zimbabwe tells of the ruined nation for whom corruption was made possible by the colonists, who “also seized land from Africans, and gave the land to white people”. http://www.history.com/news/the-rise-and-fall-of-robert-mugabe-zimbabwes-longtime-dictator The next is about the colonization in Africa and the suppression it led to. https://en.wikipedia.org/wiki/Colonisation_of_Africa  This one then shift to European settlement of the Americas and how it propelled the racism and false sense of superiority for the Europeans taking over. https://en.wikipedia.org/wiki/European_colonization_of_the_Americas The following website tells of the exchange of goods, animals, and diseases which killed so many Native Americans. https://en.wikipedia.org/wiki/Columbian_Exchange Finally, this one is about the white settlement of South Africa and the suppression of the majority by the white minority. “Of course, not all societies were equally transformed. Some resisted the forces of colonial intrusion, slavery and forced labour for extended periods. Others, however, such as the Khoikhoi communities of the south-western Cape, disintegrated within a matter of decades.” http://www.sahistory.org.za/article/history-slavery-and-early-colonisation-south-africa These will be the main topics touched on and the examples of times when white colonialism has screwed up nations and peoples. I would really appreciate feedback on both my topic and on how I may go about arguing my point effectively. Thank you!