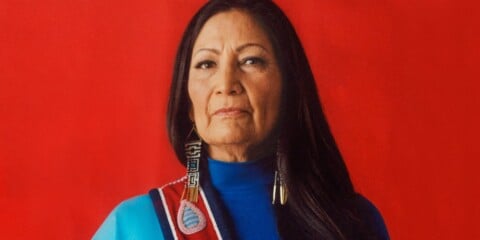 In the article, “Biden Appoints First Native American Cabinet Secretary” (BTW) I learned of Deb Haaland, the newly appointed cabinet secretary. A cabinet secretary advises the president on “the use of natural resources, public land use policies, and cultural matters”. Deb Haaland herself is a single mother who lived most of her life in poverty but later earned an undergraduate and a law degree! She built herself a small business and even worked as Chairwoman for the New Mexico Democratic Party. So far the response has been positive, but Haaland has to be approved by the Senate.

0
What else could we do to help or listen to Native Americans?x

I’m honestly quite surprised I hadn’t already heard of this as I think that this is big! A Native American women advising the president on the use of natural resources, land use policies, and cultural matters! I mean I don’t think there’s anyone better for the job. Especially considering Deb Haaland advocates for tribal rights and pro-environment policies. A big problem that has remained constant since America was built was the unfair and cruel treatment of Native Americans as we colonized their land for years and even now subject them to racial abuse, societal discrimination, wrong depiction in arts mental, spiritual and physical violence and more. It’s important to listen to Natives and I think that if Deb Haaland is approved we will at least be taking a step towards the right direction.

I believe that representation is super important. Especially when it comes to minorities who have been stripped away from their spotlight. Hearing news like this is so big and important. We need to see this more often!