Relationship between Screen Time and Children 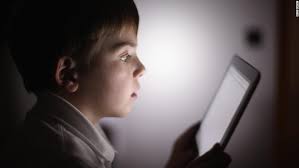 In the article, “What Does Too Much Screen Time Do to Children’s Brains?” (Upfront) I learned that screen time affects children in many negative ways. They tend to lose sleep time and their behavior changes over time. I also learned that screen time doesn’t just affect children in psychological ways but also in physical ways as well. Children that spend too much time on screens tend to gain more weight and have back problems. They also tend to have more social anxiety and social issues. In many cases, too much screen time can cause problems that last for the rest of your life. One example is retinal cells which cause macular degeneration which unfortunately is not curable.

I think too much screen time is a huge problem in today’s society which unfortunately is not talked about much. It almost feels hopeless that many people don’t think this is an issue. In fact, some people think the opposite. People think we need more technology in our households. I feel like doing that will just cause people to be addicted to their gadgets and devices. As technology continues to advance, I feel like it will become worse for children because it will continue to affect them negatively. Witnessing things like this hurts because it almost feels like you can’t do anything about it.

What do you think about the relationship between screen time and children?