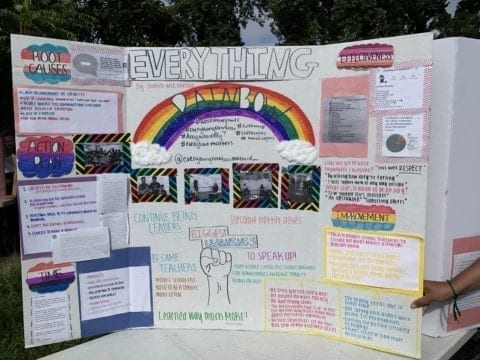 My groups topic was about LGBTQ+ rights and healths. This issue has gotten bigger throughout the years. It first started as a small movement but now more people are aware about it and now they want to create a change which is amazing because if an entire community comes together to fight against the negativity they have a chance of creating a change.

An Upstander is someone who steps up and doesn’t stay behind. There’s many other meanings to an Upstander. When my partner and I went to do middle school presentations we had many students say that an Upstander was “ a helper friend “ or “ to be someone’s shoulder “. Everyone is entitled to their own opinions but the different opinions on what an upstander meant really connected to one another.

I learned so many things from myself this year. I learned how well I can work with others. I would hate working in groups or with a partner. I like doing my work individually but this team project was different from others. I learned that I can be fearless by presenting in front of others about a topic I’m passionate about. Learning that I could take a step to creating a change is really surprising because I am standing up to help out a community.

As an upstander there can be challenges that come along your way. For example my partner and I had some challenges. For example the negative comments that were put under on of our posts. Those comments were hurtful because we are young females trying to create a change but there’s people who don’t care and like to hurt others.

As a next step there’s many things I could do. I could keep on learning more about this topic. I could research and teach my own parents and little sisters about it because they don’t have a clear understanding of it. Maybe I could join GSA and let my voice be heard by a group of other students.

If you want to be an upstander my advice to you would be to keep on fighting. If you don’t fight and let your voice go down who will help you out? Creating a change can be hard you will come upon challenges but if you keep on trying you will do it and eventually you will be recognized as a hero!