Reasons Why We Need to Delineate American Values

Home Reasons Why We Need to Delineate American Values 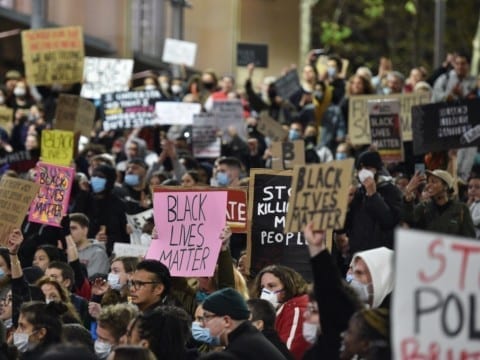 There are always many debates, talks, and disputes about what America’s values really are and what Americans stand for. Today, we have many different views on what the core values of America are and what they should be. The beliefs that some people have today do not and should not depict who we are as a country. We need to restate our values and make it clear they apply to all. People want to limit values to people who look like them and hold the same ideas. For example, some people want to limit freedom of speech and the right to protest against those who disagree with them.

In the 1st Amendment to U.S. Constitution states, that Congress shall make no law respecting an establishment of religion, or prohibiting the free exercise thereof; or abridging the freedom of speech, or the press, or the right of the people peaceably to assemble, and to petition the Government for a redress of grievances. Among the values the 1st Amendment protects, is the importance of freedom to express unhappiness with something. Now in the Amendment, it mentioned the right of the people peaceably to assemble. In the last 5 months, we have seen many protests about Black Lives Matter and police brutality. Although the First Amendment provides for the right of the people to peacefully assemble, some people believe that these recent protests are bad, unconstitutional, un-American, vile, and they need to stop. While the majority of these protests were peaceful and calm, the people who were against these protests and many news stations reported the bad parts of the protests such as, looting, breaking windows, and setting things on fire. Opponents of the protest chose these images to represent what the protesters were trying to say and getting the police and the national guard involved. The right to peacefully assemble and the values supporting that right, need to be protected because we should not be able to choose what is and isn’t a peaceful protest based solely on whether the purpose of the protest.

As stated in the previous paragraph, the Constitution provides that freedom of speech is one of the many values that Congress can make no law disrespecting. During one of  Senate Majority leader Mitch McConnell’s speeches on the Senate floor, he talked about how “radical liberals” or leftists want to get rid of all the values that the founding fathers established. This is not true, many Democrats want to reform these values and define them more broadly, not get rid of them. In the same speech, McConnell said we need the rule of law and freedom of speech and without those, we don’t have a free country. While it is true we need those values, I fear that McConnell’s meaning of freedom of speech is that people can say anything without criticism. That is not what freedom of speech means, it means you can say or post anything you want but if you put it out there you are opening up your discussion or thought for debate. I agree there are people on the far left who are a bit extreme but there are also people on the far right who are a bit extreme but it is people’s right to put those ideas out there and for it to be criticized. This article supports my point as to why there needs to be a clear and precise recognition of freedom of speech so that it applies to everyone and is consistent with each generation or era.

I have heard stories and been around people from older generations saying that Generation Z needs to be more patriotic. In a recent USA Today article, Anthony Jones stated “You can’t love what you don’t know. When young Americans say they aren’t proud of their country, it proves our education system has failed them.” While our education system may be flawed and in need of reformation, I definitely think that most of Generation Z are ashamed of how Americans often honor our values only when they apply to similar people and ideas consistent with our own. One of the many core values of America is equality. While America is seen as the land of equal opportunity, it really isn’t equal. There are still instances where not everybody is treated equally based on gender, race, and sexual orientation. For many schools, including my own, we were raised to stand and repeat the pledge of allegiance while saying “with liberty and justice for all” yet when we have the opportunity to stand up for liberty and justice for all, we are called immoral, un-American, and disgusting. Generation Z is trying to stand up for the rights of those marginalized and have America truly be the land of opportunity for all.

America’s values have existed and have been written down since the Constitution. While these values, such as the right to state ideas and protest to protect them, remain good ones, how we implement them in others is not in a good place. The core values of America need to be put first for all people so that we can come together and be proud of what America stands for. For this reason, we need to delineate American values and ensure their consistent application to all people.