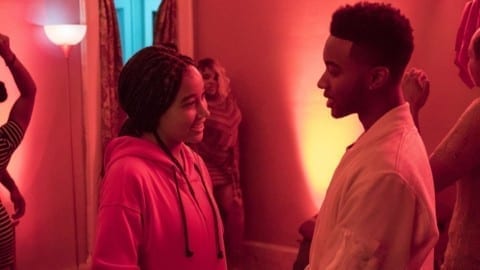 What I’ve been thinking about since I started reading ” The Hate You Give ” by Angie Thomas is that in truth everything he’s saying in the book is pretty much the same as what’s happening right now and they’re killing black people and I really think that some police officers are really kind of racist.

In the second chapter of the book “The Hate You Give” by Angie Thomas I see that the author says “A handful of policemen talk on the phone, or write on computers or they stand still. Normal stuff, like Law & Order, but it takes my breath away. ” This sentence really shocked me because it really happened to me once and it really is very ugly to be surrounded by many policemen and some stare at you as if they know you.

I identified a lot with Star because in this sentence she says ” I want to do it today ” ” I want to finish it once ” this is not typical of how Star acts. She always acts quiet and calm her in what she is saying there is because she saw when her best friend was killed and she has to say everything she saw.

I think other people are not going to like the story very much because it is drama and in truth they are going to see people who in the first chapter are going to get bored but they made me want to continue reading the book. And also some of the things she talks about is what the police told her,  which is that the police killed her best friend and it is really bad.

Dear Estefani, I am currently reading this book and I’m truly impacted by what I am reading. I connect it to the real world because there is really a lot of police brutality that is overlooked just because they were “under pressure”. I believe that there is no justification for murdering somebody because you FELT like you were in a danger. There are many other ways to handle a situation like this. This is so far a great book and I started reading it after I watched the movie! I definitely recommend it for the visuals.

Dear Estefani
I am sad about what happened to Star and you in your post, “ Really shocked me because it really happened to me once and it really is very ugly” because of the way the officers treated you and Star.
One sentence you wrote that stands out for me is: “ A handful of policemen talk on the phone, or write on computers or they stand still. Normal stuff, like Law & Order, but it takes my breath away” I think this is frightening because even though they are just standing there star is scared of what their capable of
Another sentence that Stood out was: “ it really happened to me once and it really is very ugly to be surrounded by many policemen and some stare at you as if they know you.” This stood out for me because it shows that some policemen can be very judgmental as if they already know the full story and who you are as a person , I see by your post that you like books that can be relatable to you or has something to do with what is going on with society Have you read “born a crime “? https://nowcomment.com/blogs/231199 I thought you might be interested in this because it has to do with discrimination and injustice towards the black community which is similar to the book you’re reading “the hate you give “
Thanks for your writing. I look forward to seeing what you write next because I liked the way you were able to somewhat relate to the book and give a meaningful explanation .

Thank you Brendaly if I relate a lot with the character of Star because in truth I understand her for all the problems she has gone through because anyone is going to have problems in life but the ones she has are very difficult to understand.

Dear Estephani,
Honestly because of this I want to read this book now. I was interested when you said star describes the things that happened and how its related to what is going on now in the world.

Saniya really the book is very interesting you are going to read it and you will like it but there are other people who will not like it but in truth Star is almost telling what is happening in real life well that is how I see it. And thanks for your comment