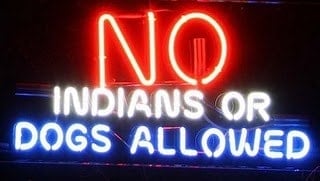 I rode the book “the absolutely  true diary of a part-time indian” from sherman alexie and a big topic in the book is american culture, specially indian culture and how other people in the united states treat native american people today.

The key topic that follows through the whole story is racism against native americans and how white people treat them. Junior, the main character from the book, describes a lot of situations when people are racist against him because he is an native american. The people expect from them that they will fail in their live and that they supposed to fail. Also, the other kids in his new school called him names in the beginning like “chief”  or “redskin”.

These are some examples from the book, but I think there is more than that, people still have to fight against racism every day. I don’t really understand it, america is a country based on immigrants, literally everyone, except from the indians, are immigrant, because in our history people moved to america. People should be open minded to immigrants, but  lot of them have a huge problem with immigrants and don’t want them in their country.

Tim Glago wrote an important sentence to that “Yes, there is racism against Native Americans in much of America and like the racism against African Americans; it needs to be dragged out from under the rug and addressed.” (https://www.huffingtonpost.com/tim-giago/racism-against-native-ame_b_309017.html)

It is so important to talk about issues and don’t ignore them, they won’t go away if nobody talks about it. We only can change something if we start talking with each other and accept each other.

“I know, I know, but some Indians think you have to act white to make your life better. Some Indians think you become white if you try to make your life better, if you become successful.” (Junior, the absolutely true diary of a part-time indian). It is sad that he native americans, if Junior says the truth, think that. Never try to be someone else. I think you can’t act “white” or “native american”, that has not that much to do with who we are and it has not really much to do with our culture, I think.

“I see Americans of every party, every background, every faith who believe that we are stronger together: black, white, Latino, Asian, Native American; young, old; gay, straight; men, women, folks with disabilities, all pledging allegiance under the same proud flag to this big, bold country that we love. That’s what I see. That’s the America I know!” (Barack Obama, https://www.brainyquote.com/quotes/quotes/b/barackobam754716.html?src=t_native)

I think this sentence is a good ending for my comment about racism against native americans. What obama probably wanted to say is that every american citizen, no matter who they are, hold together and be proud of who they are and their american culture, that they are part of this big culture and state, that american culture is not kinda melting pot, it’s more like a salad bowl (I talked about that in another post on youthvoices, https://www.youthvoices.live/2017/10/04/is-american-culture-just-a-melting-pot/), that influences so many people in the world. I think that is a goal for everyone, to be proud of who you are and where you come from and your culture, because our culture partly define us and who we are.