R32 subway cars, oldest and most rickety at 54 years old 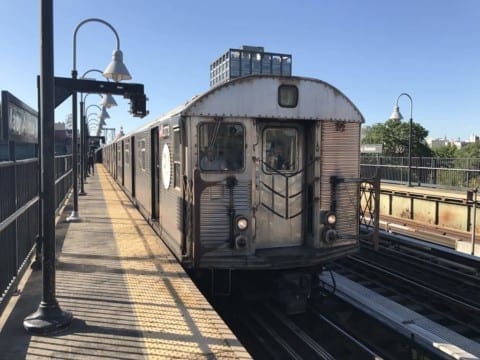 The R32 subway cars are the oldest and most rickety subway cars in the subway system at 54 years old. Built in 1964, they were originally expected to be retired by 2009, but they are still going due to delays of the new R160 and R179 fleet delivery and the R44’s constant breakdowns and flaws. They are not expected to be fully retired until 2022, when they will be 58 years old!

These cars can be found on the C, J and Z lines where they are at their worst. Many people who take the C are frustrated about them, so in 2015, because of their terrible air conditioning and maintenance, the new R160s on the mostly above ground J and Z lines were displaced to the C, which gave its R32 stock to the J and Z.

Dear Booker, I am extremely fascinated by your post, ‘R32 subway cars, oldest and most rickety at 54 years old’ because of how it shows the many problems that the MTA has, that they have yet to fix. The people must acknowledge and take action! I agree with this post tremendously. One thing that you said that stood out to me was ‘They are not expected to be fully retired until 2022, when they will be 58 years old!’ This shows how the MTA is extremely careless and take all the time in the world to fix their problems, when they should be fixing them as fast as possible. Another thing that you said to me that spoke to me was ‘The R32 subway cars are the oldest and most rickety subway cars in the subway system at 54 years old.’ because it conveys the bitter truth of the MTA. It shows how they do not care about the dangerous safety hazards and safety conditions that are brought forth by keeping these trains on the tracks.

I invite you to come check out my website, https://bettermta.wordpress.com/ , as it is strongly related to your topic. We also focus on trying to gain the attention of the MTA in order for them to fix the dangerous conditions and safety hazards that they provide to the passengers of the MTA.

We have also created a petition, https://www.change.org/p/andy-byford-metropolitan-trash-authority in order to obtain the acknowledgment of Andy Byford, the CEO of MTA. It would be greatly appreciated if you can sign it.

Thank you spreading awareness by creating this post! I hope to hear more from you soon!

Dear Booker, I am intrigued by your post because I feel very passionate about the MTA. I feel the need to bring to peoples attention that there are many problems that need to be fixed. I find your post very informative and interesting.
One thing you said that stands out for me is: “R32 subway cars are the oldest and rickety subway cars at 54 years old”. I think this is interesting because one would think as the years go by more newer trains would come into view than there are now.
Your post reminds me of something that happened to me countless times. There were many times when the trains were super delayed. I would end up being late to school. I also think of the people who would be late to work.
I politely encourage to keep writing about the MTA and help my colleagues and I out with promoting our blog and petition https://teensforthemta.wordpress.com/ and https://www.change.org/p/andrew-cuomo-solve-issues-in-mta-today

Thanks for your project. I look forward to seeing what you write next because your posts relate much with the MTA. I also see that not everything about the MTA has to be critical.

This article was very detailed and informative. There are so many facts about subways I never knew before! I feel bad for all of the people who have to take the R32 trains to work every day.