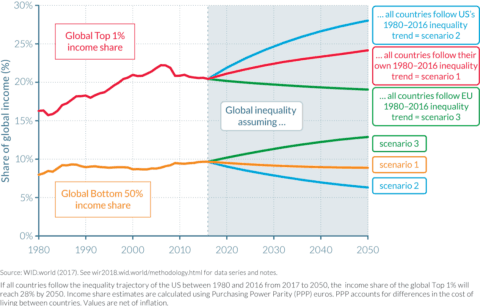 One trend that Orwell expresses concern for is despotism taking over our society. In the book, there is an overarching, “all-powerful”, a presence who is Big Brother. The Party represents a concern for there being no diversity in political preferences. No one has any individuality and everyone is forced to have the same view and punished if anything slightly differs. This also creates a gap in social equality, creating a hierarchy with many more overwhelmingly lower-class citizens.

My first source talks about how social inequality refers to voting rights, wage gaps, levels of education, and overall quality of life. This site specifically talks about how religious or ethnic groups create these gaps in the entire population. This directly relates to 1984, because it is the Party, that was put into power only the wealthy. However it does also specify how social inequality is different from economic inequality, yet it is the social gap that creates a continuously growing economic gap.https://www.sciencedaily.com/terms/social_inequality.htm

My second source talks about how the richest men in the world who are controlling the “poor” 3.6 billion people. In 1984 the statistics are rather close, meaning that the number of members in the Party, do not even compare to the masses of “subjects” that live in their shadow. https://money.usnews.com/investing/articles/2017-02-14/how-to-solve-income-inequality

The final source is a chart that solidifies the idea that the people or party that is dominating the society is only considered the top 1% of the entire population. This chart represents current day trends that were previously predicted by Orwell in 1984. https://wir2018.wid.world/executive-summary.html

Considering all these statistics on the inequality gap in our current society there are a few solutions that can be proposed. First, we can look at the income gap between the general population and the top 1% commissioners in today’s society. Then, a possible solution would be to enforce a standard living wage that would give the general population a higher quality of life. The only people that would have any ability to make these changes would be government officials. However, if our government decides not to take action with that specific proposed solution; another idea could be to tax the wealthy more heavily. Then, the wealthy would not be as excessively above the rest of the general population.