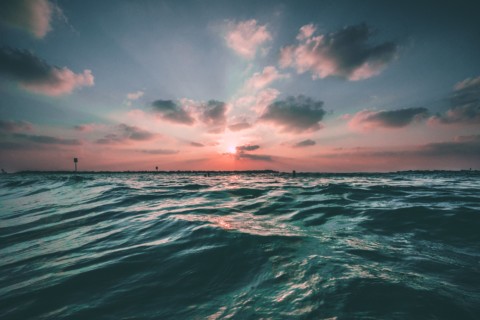 Since the beginning of time, humans have used the oceans as their own personal trash can, dumping so much plastic into the ocean that by 2050, there will be more plastic than fish in the ocean. However, the dangers of ocean pollution extend to humans as well as marine life, putting all life on Earth in danger. Our heavily polluted oceans littered with plastics, chemicals, and other wastes, cause many other subset problems that affect almost every aspect of lives all over the world.

The world as we know it is threatened by ocean pollution, which causes an extreme increase in climate change and rising sea levels. The pollution of oceans actually heavily affects climate change because oceans help regulate the temperature of the Earth (Fleming). Since oceans are becoming more heavily polluted, they are unable to properly regulate their own temperatures as well as the temperature of the Earth. This has led to a drastic increase in ocean temperatures and majorly contributes to global warming. The increased temperatures of the ocean water also causes sea levels to rise, since water expands when it gets warmer. “As the level of the sea rises, salt water can intrude into freshwater systems on land, which may have significant impacts on the quality and availability of drinking water” (Fleming). Water is a necessary substance to sustain life, and getting clean water will become much more difficult and expensive in the future if this problem is continually ignored and unsolved. This means that people, namely poor families, all over the world will struggle to access water- a basic necessity for survival- because humans have left an obvious problem unchecked for centuries. These same middle/low class families also rely on the oceans to support and provide for them in other areas, such as food, and they do not have the resources they need to support themselves when the oceans are unable to provide for them.

The oceans also take on roles and contain substances that people do not typically expect to support life on Earth. Trees and plants usually get all the credit for providing oxygen for us to breathe, however, the oceans, specifically the coral reefs, also provide us with 80 percent of the oxygen we breathe (Sakurra). Ocean pollution has put our coral reefs in danger, which means realistically, we may eventually not have enough oxygen to survive without breathing aids and machines to assist us in simply breathing. However, coral reefs do more for our world than just providing oxygen. They also protect the coastline from the rising sea levels that can cause massive destruction on our shores and beyond (Sakurra). With rising sea levels, storms are more likely to increase in severity and become more common, meaning coral reefs are necessary to protect coastal cities from these severe storms. Realistically, without coral reefs and with an increase in harsh storms, all coastal cities will eventually be completely destroyed and submerged, causing a global economic crisis as we scramble to support those affected by these storms.

Furthermore, ocean pollution appears to be increasing the frequency, severity, and global geographic extent of harmful algal blooms or HABs, which are moving poleward (Landrigan). Harmful algal blooms (HABs) release toxins that contaminate drinking water, which both directly and indirectly harms humans. Humans drinking contaminated drinking water may have serious consequences for our health and may cause many diseases. However, livestock are also affected by this contaminated drinking water, and because of this, our main food sources (livestock and seafood) are put at risk because of ocean pollution. Unfortunately, this will lead to an unstable and more expensive food source in the future, which will once again put poor families at a disadvantage because they will not be able to afford the food they need to survive.

It is safe to say that ocean pollution is a very serious problem that will have many detrimental effects, especially on humans, if left unchecked and unsolved. Life as we know it will be completely changed forever and our world may even come to an end if we do not work to solve this issue. People all over the world are affected by ocean pollution, which has and will continue to get worse over time, especially as we now live in the “plastic age.” Our oceans have provided for us since the beginning of time, and if we do not return the favor, our lives will drastically change for the worse.

This post was very thought provoking. The climate discussions centers greatly around air pollution but air quality and ocean pollution go hand in hand. I was listening to a podcast the other day that was talking about how rising global ocean temperatures are causing the air quality to worsen and sea level to rise by 35 mm a year. The conditions of the ocean are the first to surpass the point of no return in regards to the climate crisis. If we want to work towards a greener planet, we need to start with the ocean.

I thought this post was very intriguing and informative and I think you addressed a very pressing and relevant topic. I am in an oceanography class and I have been learning a lot about climate change and rising sea levels. Ocean pollutants definitely effect climate change and I think you had really strong a really strong supporting argument of that statement. I’m excited to see what you write next, for this was very interesting, informative, and important. These are the kinds of things everyone needs to be informed about and I think you did an excellent job delivering the information.

I am motivated by your post, “Ocean Pollution,” because it addressed an issue that is not completely understood by most people. Your post was very educational for me, and it had lots of information that I felt really made me understand the seriousness of this problem.
One sentence you wrote that stands out for me is: “Realistically, without coral reefs and with an increase in harsh storms, all coastal cities will eventually be completely destroyed and submerged, causing a global economic crisis as we scramble to support those affected by these storms.” I think this is enlightening because it is hard to imagine that the oceans affect us directly in so many ways. I hadn’t thought of the direct problems from ocean pollution other than health reasons, and you have made it clear that there are so many issues that root in ocean pollution that include the economy. Another sentence that I appreciated was: “Trees and plants usually get all the credit for providing oxygen for us to breathe, however, the oceans, specifically the coral reefs, also provide us with 80 percent of the oxygen we breathe (Sakurra).” This stood out for me because it really puts in perspective the size and role of oceans for the rest of the world. Have you seen this article about coral reef conservation?

I thought you might be interested in this because of the topic of coral reefs and their destruction. Thanks for your writing. I look forward to seeing what you write next because you had great information that was stated very well. I love hearing someone care so much about the environment and I hope that many people were informed by this. I know that your next post will be full of important information that addresses more relevant issues.